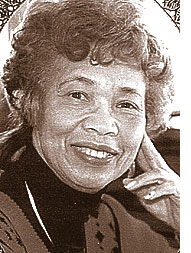 Oris was born Oct. 27, 1929 in Martinsville, Va. She was the daughter of the late Samuel H. and Fannie Swanson Carter. One of five siblings, Oris was married to the late Winsom Amos, and after being widowed, married Charles B. Cross in May of 2002, moving from Ohio to Charlotte in June of that year.

A warm, loving person, excellent communicator, teacher and author, Oris taught in public schools in Virginia and Ohio, and at Ohio State University, Otterbein College, Wright State University and University of California. In addition to teaching, she was an educational development consultant from 1988–1992 in the Miami Valley, and conducted lectures and seminars at Central State and Wilberforce Universities.

One of Oris’s greatest accomplishments was to complete and publish her autobiography, The Lord Laid His Hands on Me, in July of 2011. The work is the personal testimony of a benevolent woman who was a much-loved and respected matriarch.

Oris attended Central Chapel AME Church, where she was a trustee chairman, and was a volunteer tutor in the Yellow Springs schools. Among her many honors and awards, Oris was named one of the “Top Ten Women of the Miami Valley.”

Oris was preceded in death by her siblings, Esther Martin, Ruby Eggleston, Ollie Carter and Roy Carter. She is survived by her husband, Charles B. Cross, her daughter, Patsy Demmings, grandchildren Jeffery and Angela Demmings, great-grandsons Jaden and Jordan Demmings and great-granddaughter Kristina Aniton, all of Cincinnati. She is also survived by daughter Lynn Barganier of Washington, D.C., daughter Jacqueline (Jonathan) Belton of Charlotte, N.C., son Christopher Cross of Charlotte, N.C., by grandson David Smith, II and great-granddaughter Saliyah Love Smith of Charlotte, N.C., as well as many nieces, nephews, extended family members and friends.