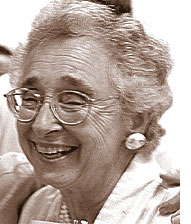 Paula Lazarus Spier died Oct. 4, in Brewster, Mass., of Parkinson’s disease. A dean emerita of Antioch International, crossword puzzle whiz, genealogy buff, covered-bridge lover, avid knitter and expert seamstress, she was 88. Carl Spier, her husband of 67 years, survives her, as do her son, Peter, daughter-in-law, Gail Turner and granddaughter, Jessica Turner Spier, all of Brewster, and her daughter, Carol Spier, and son-in-law, Richard Cullen, of Bethlehem, Conn. She is survived also by her sister and brother-in-law, Ellen and Leonard Farwell, of Richmond, Calif., and Brewster, as well as by 10 nieces and nephews. She was predeceased by her brother, Richard Lazarus.

Paula was born in Brooklyn, N.Y., on Aug. 12, 1923, to William and Frieda Lazarus. She grew up in Crestwood, N.Y., summering with her family in Mashpee, on Cape Cod. She met Carl in 1941 when both were freshman at Antioch College in Yellow Springs, where they made their home from 1951 until 1999, when they relocated to Brewster, on Cape Cod. She held a bachelors degree in personnel administration from Antioch College and a masters degree in counseling psychology from Ohio State University.

A distinguished member of the international education community, Paula enjoyed a long career at Antioch College, beginning in 1957 as associate at Antioch Education Abroad, advancing to become director of student programs, and then dean, at Antioch International. Choosing semi-retirement in 1981, she remained at Antioch International as academic dean until 1985. Throughout her career and well into retirement, she was active in the National Association of Foreign Student Affairs, or NAFSA, Association of International Educators, the Council on International Educational Exchange, or CIEE, Great Lakes College Association and other educational groups, serving on boards and committees, participating in many conferences of her peers and consulting for other institutions of higher education on the benefits, development and administration of international studies programs. In 1981, she was one of a small group of scholars traveling to Germany on the Fulbright U.S. Teacher Exchange Program. Antioch granted her an honorary doctorate of humane letters in 2004. She was honored by CIEE and NAFSA, and listed in Who’s Who in Education, Who’s Who in American Women and Who’s Who in America.

To her friends and family, Paula was admired for balancing professional, community and personal life at a time when it wasn’t so common to do so. She was a long-time member of the Yellow Springs Historical Society, Library Association and League of Women Voters, and in retirement on the Cape, a volunteer at the Brewster Ladies’ Library and the Cape Cod Museum of Natural History. Paula was celebrated for the astonishing array of cookies she baked every holiday season, her fascination with the relaxing craft of knitting, her passion for mystery novels, her total lack of interest in physical exercise, her endless curiosity about life in other places and her love of travel, the speed with which she could type sans error, the treasure-trove of family history she compiled and the discipline that enabled her to accomplish nearly everything she aspired to do.