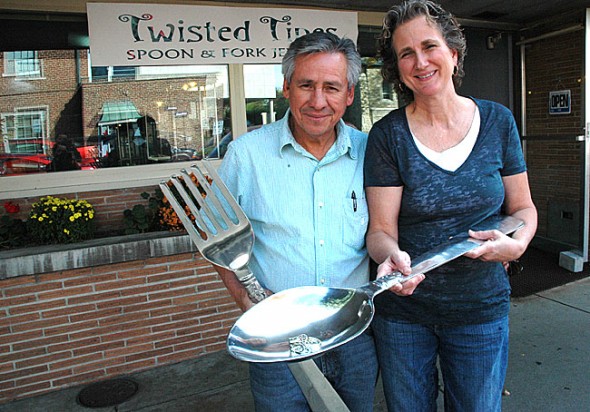 Connie and José Soto opened their second handmade silver jewelry shop in the village last weekend in the space where Hasser’s Barber Shop used to operate. (Photo by Lauren Heaton)

For many weeks a paper sign posted in the storefront formerly occupied by Hasser’s Barber Shop has promised “something twisted” was coming to the space on Xenia Avenue. Before the guessing became too unsavory, new shop owners Connie and José Soto chose last weekend’s Street Fair to unveil their new handmade metal jewelry and art store, Twisted Tines.

The Sotos opened their first jewelry shop on Dayton Street this past spring, before they knew that Greg Hasser was planning to close the barber shop he had operated at 255 Xenia Avenue for over 25 years. That business, called Artistic Silver, has done well on the north side of the central business district, but the couple wanted a second space with greater visibility, and a bigger retail and workshop space. They plan to keep both shops for now, stocking Artistic Silver with the silver-plated work and using the Xenia Avenue space for fine jewelry, sterling silver and semi precious stones and metals.

The Sotos have been coming to Yellow Springs for 19 years from their home in Piqua, selling jewelry made from silverware and other recycled brass and copper at Street Fair (often at a booth right in front of their current storefront.) When José Soto was laid off from his job as an electrician last year, the couple brought the business they started in their basement out into the retail world to try to make a go of it, José said this week.

José Soto grew up in Mexico City, where his family runs a silversmithing and wholesale jewelry business, Compañia Luna, that exports products to the U.S. and Japan. The couple returns there twice a year to buy and produce some of the jewelry they don’t have the space to make here. The couple left this week for one of those three-week working vacations, leaving their two stores for Josie Inslee to manage in their absence.

Twisted Tines will also feature handmade art from local and regional artists, including local jewelry makers Talitha Greene and Flo Lorenz. Inslee recognizes the opportunity the shop is offering to local artisans who have limited means of exposure for their crafts.

“It’s wonderful that Connie and José are opening their door for local artists — that’s what people come to Yellow Springs for, is handmade products,” she said.

Hasser, who lives in Springfield and preferred not to wade into the history of his long-time business, owns the building the Sotos are leasing. He closed his shop due to health issues, and he will continue to lease the building in the village, he said this week.