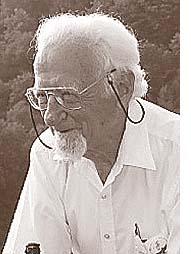 Berger Mayne died on Sunday, Nov. 6, at Miami Valley Hospital from head injuries sustained in a cycling accident. He was 91.

Berger was born in eastern Colorado in the now abandoned settlement of Towner. The family moved to nearby Eads, where Berger’s father served as sheriff. Berger and his brother enjoyed hunting and fishing, and sometimes adopted local wildlife as pets. He attended Western State College in Colorado, graduating with a degree in biology in 1947. He went on to graduate school at the University of Utah in Salt Lake City, where he received a PhD in experimental biology in 1958.

During World War II, Berger was drafted into the army where, because of his science training, he was assigned to a hospital in Hawaii.

While in graduate school he met Yoland “Yolie” Carter. They were married in 1956. They enjoyed camping, hiking and skiing together, passing that joy on to their children and grandchildren. Their first child, Leland, was born in 1958 in Salt Lake City.

After Berger finished graduate school, the family moved to Minnesota, where Berger had a position at the University of Minnesota. Their second child, Walter, was born there in 1960.

In 1962, Berger took a position at the Charles F. Kettering Research Laboratory in Yellow Springs. His scientific research interests throughout his career concerned the mechanisms of photosynthesis and nitrogen fixation in plants.

In Yellow Springs, Berger made many friends and enjoyed gardening, hiking in the Glen, canoeing on the Little Miami River and riding his bicycle in and around town. After his retirement, he joined the Spring Run Trout Club and enjoyed fly fishing and social activities with friends. Berger was a common sight around town on his bike.

He is survived by his two sons, Leland and Walter, two daughters-in-law, Lynn McConville and Emily Mayne, two grandchildren, Peter and Eleanor and many friends.

A memorial service will be held Sunday, Dec. 4 at 3 p.m. in Glen Helen’s Outdoor Education Center in Yellow Springs. In lieu of flowers, memorial donations can be made to the Glen Helen Association, American Civil Liberties Union or Tecumseh Land Trust.