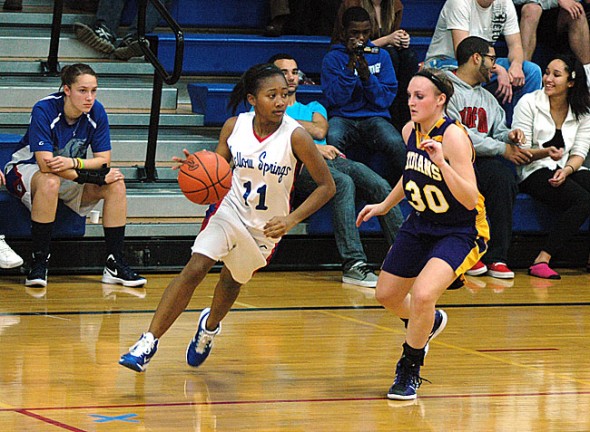 The challenge for first-year girls basketball Coach Tim Barga is how to turn a team of volleyball and soccer players into contenders on the basketball court, he said last week. Even though many of the girls consider the sport secondary, Coach Barga hopes to build a team and a program that can compete.

“We have some talent there, it’s just whether they want to get it out of themselves,” said Barga, a veteran coach with nearly 30 years of experience and close to 500 wins. Last year the girls team went 5–7 in the Metro Buckeye Conference (7–14 overall).

Junior point guard Maryah Martin, at 5´7˝ tall, returns to lead the Bulldogs. Last year Martin was named to the first team all-conference, was the Bulldogs’ MVP and netted nearly 14 points per game.

“Martin’s a good ball handler, a good hustler and a good distributor of the ball,” Coach Barga said.

Running basic dribbling and passing drills in recent weeks, Coach Barga, who lives in Versailles, said he hopes to instill some fundamentals in the players and make sure they continue to improve throughout the season. With no seniors on the roster, Barga is already thinking about a bright future for the program.

“If I can get them to really like the game, then I think things will turn around for us,” Barga said.

In their season opener this week, the girls team lost 69–18 after falling behind 27–7 by halftime against visiting Mechanicsburg. Last year the Bulldogs went down by an even larger deficit.

The Bulldogs fought hard throughout the match against the Mechanicsburg starters. Maryah Martin and Angela Allen contributed five points each, while Brianna Ayers netted four and Kennedy Harshaw and Keturah Fulton each added a basket.

Greg Felder Jr. and the rest of the boys basketball team take to the court this week with a new lineup and a lot of potential. At the start of the season, much is unknown about a varsity team that includes a transfer student and star soccer player in his first year on the team. But if the new team can learn to play together, stay strong on defense and share the ball on offense, they could compete for the conference title, according to Coach Brad Newsome.

“Success for this team is going to be whether they live up to their potential,” Newsome said this week. Last year the team went 6–6 in the Metro Buckeye Conference (8–12 overall).

But his supporting cast is every bit as important. Cole Edwards and Roland Newsome are needed to grab rebounds. Austin Pence needs to be a role player. Jake Fugate and Antone Truss should hold down the defense.

Even though Coach Newsome said he believes the team can win 15 or 16 games and go deep into the post-season tournament, first they need to work together to play up to their skill level.

“Wins and losses will happen but if they can play up to their potential, I feel like they’ll go far,” he said.

The small but mighty Bulldogs swim team doesn’t have its first meet for a few weeks. But at practice with their first-year Coach Kara Jacob, the swimmers are excited for a season which could end with senior college recruits Erika Chick and Elizabeth Malone on the podium at the state finals.

Joining Chick and Malone once again are sophomores Zoey McKinley and Rachel Meyer. Last year the four swimmers together qualified for districts in the 200-yard medley relay and this year they’re eyeing states. Plus there are three newcomers to the girls team, first year swimmers Alex Brown and Ashley Merritt and freshman Emma Lomar.

Last year Taylor Ford was the lone boys swimmer and this year that lonely position will be filled by freshman Connor Gravley-Novello, who is also a cross-country runner and musician.

With meets every weekend in January, Coach Jacob, a senior economics student at Wittenberg University, said she believes the girls, and boy, will have “a lot of opportunities to improve and drop time.”