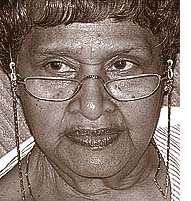 Naomi was born Sept. 25, 1927. The fifth of six daughters of Della (Baber) Adams and Lewis Adams, Naomi, like her family since 1862, was a lifelong resident of Yellow Springs. Naomi and James A. McKee were married on March 6, 1947.

Naomi professed her faith in God at an early age and was an active member of First Baptist Church, Yellow Springs, until her health began to decline.

During the span of her career, Naomi was employed by Antioch Bookplate Company, Vernay Laboratories, Inc. and the Yellow Springs Instrument Company, from which she retired, after 38 years, as director of human resources in 1986. When the Vernay Laboratories, Inc. was recognized for outstanding war effort, Naomi was presented an “E Pin” by First Lady Eleanor Roosevelt.

In addition to raising five children, Naomi served on the boards of Friends Care Community and the Glen Forest Cemetery and was a member of the Victorettes, the Aristocrats, the Culture Club, the Retirement Set, the Yellow Springs Instrument Company Retirees and the National Association of Watch and Clock Collectors.

She was preceded in death by her parents, her loving husband of 54 years, James McKee, her sisters Genevieve (Drake) Rivers, Lois (Floyd) Edwards and Charlotte (Edgar) Jordan and her loving son-in-law, Frederick J. Smith, III.

She was a strong supporter of the James A. McKee Scholarship Fund, where contributions can be made in her honor at P.O. Box 263, Yellow Springs, OH, 45387-0263.

Services will be held Friday, Dec. 9 at 1 p.m. at the First Baptist Church, with Pastor Vurn O. Mullins officiating. Visitation will begin at 9 a.m., with the family present from 11 a.m. until time of service. Interment will be in Glen Forest Cemetery, immediately following the service.