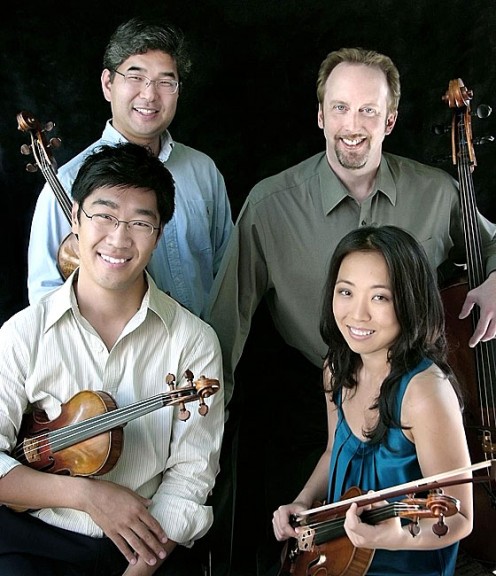 The Johannes String Quartet will perform as part of the Chamber Music Yellow Springs series on Sunday, Feb. 26, at 7:30 at the First Presbyterian Church. The group will play quartets by Mozart, Schumann and Respighi. (submitted photo)

Composed of four of the most masterful young soloists, C. J. Chang, principal violist of the Philadelphia Orchestra, Peter Stumpf, principal cellist of the Los Angeles Philharmonic, Concert Artists Guild violin winner Jessica Lee and Soovin Kim, winner of the Paganini violin prize, the Johannes Quartet is described by Arnold Steinhart as “one of the great quartets of our time.”

Mozart dedicated his Quartet K.428 to Haydn, his personal friend and the inventor of the string quartet. Mozart had a strong sense of key, and for him, E-flat meant noble, confident and straightforward music.

However, the composer twisted the scale a bit with chromatic notes, implying that things are not really that simple. Repeated bouts of rheumatic fever had partially crippled his hands, and it has been suggested that he turned to composing with such fervor at this point because he knew that his career as a piano soloist could not last.

Robert Schumann was one of the founders of romanticism, an important link between Mendelssohn and his own pupil, Brahms. His Op. 41 quartets are admired for their buoyant high spirits and brilliant devices, but they fell out of favor in the 20th century for lack of large-scale coherence. Current thinking is that Schumann was clinically hypo-manic at the time, ideas racing through his brain in uncontrollable profusion. But that raises the question: where does anyone get the courage to create an original work of fine art for which there is no commercial demand and may not ever be? Is great art a triumph of the human spirit over prudence and common sense?

Respighi, famous for his lush tone poems celebrating the beauty and the former glory of Italy, wrote a dozen chamber works which are almost never performed. This voluptuously sensuous Quartet in D will be a revelation — Respighi had studied in Russia under Rimsky-Korsakov, and could evoke gorgeous sonorities almost beyond the ability of ordinary musicians to play. His later patriotic efforts to raise Italy from ruin endeared him to Mussolini, but Respighi was no fascist, and befriended such famous anti-fascists as Arturo Toscanini and Enrico Fermi.

Professor Charles Larkowski will give a free pre-concert talk at 6:45 p.m. There is a post-concert dinner and reception for the artists, for which a reservation is required. Please call 937-374-8800 or visit http://www.cmys.org to make a reservation. Tickets at the door are $20 for adults, $6 for students.