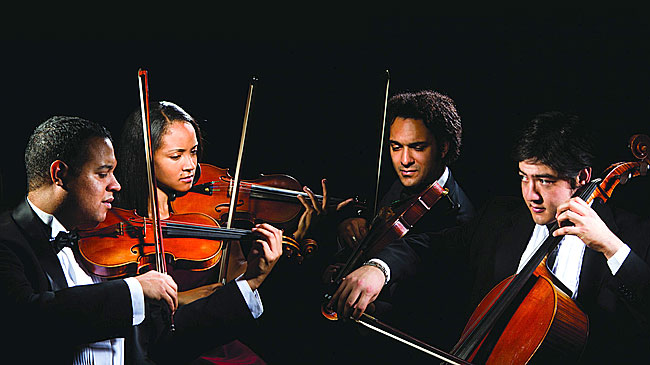 Yellow Springs is hosting the Harlem String Quartet in a mini-residency from Thursday through Monday. Organized by Chamber Music Yellow Springs and funded in part by the Ohio Arts Council, the group’s stay will include outreach concerts on Friday, March 16, to the Antioch School, Stivers School for the Arts and Wilberforce University, plus master classes for young quartet players from Wittenberg University and the Springfield Youth Symphony.

What does Harlem have to do with string quartets? The Harlem Quartet, based in New York City, chose the name to express their admiration for the Harlem Renaissance movement in the arts and literature, which included such luminaries as Langston Hughes, Marcus Garvey and Zora Neale Hurston. The quartet was formed in 2006 from the first prize winners of the Sphinx Competition, run by the Sphinx Organization, which promotes classical music by and among Hispanics and African Americans. They have gone on to play Carnegie Hall, the Today Show and the White House, twice.

The CMYS concert on Sunday will open with a piece which the Harlem Quartet commissioned, “The Figure” by Judith Lang Zaimont. Next, they will play “The Adventures of Hippocrates,” the String Quartet No. 1 by jazz great Chick Corea, with whom they often collaborate. These are fully written-out classical string quartets which use modern and jazz idioms as expressive devices. They will conclude with the beloved String Quartet No. 2 by Russian composer Alexander Borodin, replete with melodies familiar from their adaptation in the Broadway musical Kismet.

There will be a free pre-concert lecture by WSU Professor Charles Larkowski at 6:45 p.m. and a post-concert reception and dinner, for which a reservation is required. Visit http://www.cmys.org or call 374-8800 to reserve tickets or seats at the dinner.