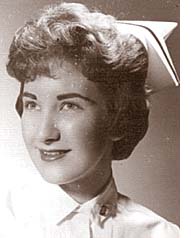 Carol was born on April 19, 1941 in Dayton, the daughter of the late Henry and Teresa (Pitstick) Dillon. After graduating from Bryan High School in 1959, Carol studied and received her registered nurse degree from St. Elizabeth Hospital in Dayton, and later worked for many years at Community Physicians of Yellow Springs. On Oct. 6, 1962 Carol married Charles W. Koeller of Wengerlawn, Ohio and then went on to have a bustling family of six children. She was a steadfast wife, mother and grandmother who treasured spending time with her family. Carol had the unique ability of making those she encountered feel they were special and important in her life. She was the heart of her family and its greatest supporter and confidante.

Carol was a lifelong member of St. Paul Catholic Church in Yellow Springs and enjoyed gardening, traveling, sewing and reading, and was a great cook. She had a positive outlook on life and found true pleasure in every day.

Carol is survived by her husband of more than 49 years, Charles “Chuck” Koeller, daughter Teresa (Jack) Brueggemann, sons Jeff (Jannette), Joe and Rick (Freda) Koeller, grandchildren Carolyn, Caleb, Jonathan, Jacquelyn and Evan, brother Richard (Sue) Dillon and many special nieces, nephews and friends. She is preceded in death by two sons, Timothy and William “Billy” Koeller, and by her sister, Mary Dillon. The family is grateful for the loving and diligent care that Carol received at Friends Care Community during her difficult convalescence.