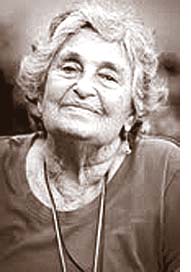 Rita Colbert, resident of Yellow Springs since 1950, died on May 6 at the age of 85 in Milwaukee, Wis.

Rita was born in Newark, N.J. on June 28, 1926. She was a graduate of Antioch College and a successful businesswoman. While working as an importer, she became an expert on ethnographic and pre-Colombian art. She was also a long-standing member of the Shakespeare Club and the Glen Helen Association, or GHA, spending many hours as a volunteer in the GHA Nature Shop.

In lieu of flowers, donations may be made to the Glen Helen Association