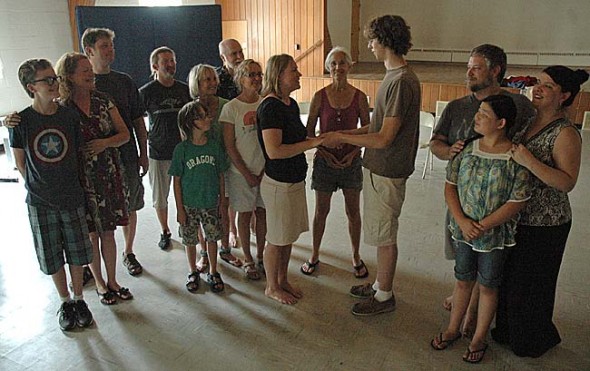 Our Town characters gather for the wedding of Emily Webb and George Gibbs, center, played by Jeanna Breza and Colton Pitstick. Center Stage’s production of Our Town runs June 22–23 and 29–30 in Westminster Hall in the First Presbyterian Church, with shows starting at 8 p.m. Other community cast members are, from left, in back, Duard Headley III, Lara Bentley, Thor Sage, Howard Shook, Thomas Siebold; in front, Lucas Sansom, Sarah Wildman, Ellen Ballerene; behind the couple is Ali Thomas; on right is Robert Campbell, Juno Shemano and Miriam Eckenrode. (Photo by Megan Bachman)

‘Our Town’ comes to our town

Thornton Wilder may have had a place like Yellow Springs in mind when he wrote his 1938 play Our Town. Though originally set in the small town of Grover’s Corners, New Hampshire, in the early 1900s, this time it will take place in the village of Yellow Springs, Ohio, in 2012, complete with references to Glen Helen and modern dress.

“The approach that we’re taking is that Our Town is our town,” said Lorrie Sparrow, who will direct a two-weekend run of the Center Stage production on June 22–23 and 29–30 at 8 p.m. in Westminster Hall at the First Presbyterian Church of Yellow Springs, 314 Xenia Avenue. Tickets are $10 at the door. Pre-show music begins at 7:15 p.m. Audience members should dress in comfortable clothing since Westminster Hall is not air-conditioned.

The town in the play could very well be Yellow Springs, according to Colton Pitstick, who plays George.

“Everybody wants to know about everybody else — that’s familiar,” Pitstick said. And here, as there, there are gossipers, infamous people, pillars of the community and regular folks, according to Miriam Eckenrode, who plays Mrs. Gibbs.

But those who remember Our Town as folksy, old-fashioned and sentimental will be surprised.

“It’s about as sentimental as a slap in the face,” and the play is as relevant today as the day it was written, said Sparrow. Our Town deals with themes of life and death and resonates with contemporary struggles like social injustice and economic inequality while delivering a universal lesson that life should not be taken for granted, cast members said.

“It’s a testament to how much we should appreciate life,” said Jeanna Breza, who plays Emily Webb. “Slow down and savor every moment because anything can change in the blink of an eye.”

The local production holds true to Wilder’s intention that his play be performed with little scenery, no set and minimal props. But in a new twist, the entire play will be performed in the center of a circle of audience members, since “life happens in a circle,” Sparrow said.

Our Town is the first full production of the revived Center Stage, an organization that operated out of its Dayton Street theater for 30 years before closing in 2003. Kay Reimers spearheaded the rebirth last year after amassing local theater talent in 2011’s The Cherry Orchard and for several radio plays in recent years. Center Stage looks to put on several classic pieces and new works each year and to eventually become a non-profit and raise money for its productions. Until then Reimers, the producer, is volunteering her time, along with the cast, director and quartet of local musicians playing the pre-show and incidental music.

Sparrow said that the show — and community theater in general — is a “privilege of love.”

“We all just want to come to together to make art together — no one’s getting paid,” Sparrow said.

Community theater is a vital part of the village and gives local performers an opportunity to exercise their acting muscles, actors said.

“I like that anyone can be in it — it’s not an elite group of people,” said Eckenrode.

“Community theater is very important to this town,” added Breza. “We’re an arts community so there are many people with theater backgrounds — actors, playwrights, directors — and to be able to utilize all those people is really important.”

Rob Campbell, a theater performance major, makes his first stage appearance in 15 years in the role of Mr. Gibbs, while Tom Siebold, as Simon Stimson, will perform Our Town for the third time in his life, and this time as the play’s darkest character. But even though many fellow actors are his neighbors, this time the actors are better, Siebold said. Pitstick, a recent Yellow Springs High School graduate, said the transition between high school theater and community theater has been a “little scary” but that working with more seasoned actors has improved his abilities.

Ali Thomas, in the role of the Stage Manager that guides the audience through the play’s three acts of Daily Life, Love and Marriage, and Death, has relished local theater opportunities in recent years, part of a deep passion for the stage.

“I really love live theater — even as an audience member,” Thomas said. “I don’t go to films very often because I think we connect to a living being in a different way than a flat screen.”

One Response to “‘Our Town’ comes to our town”