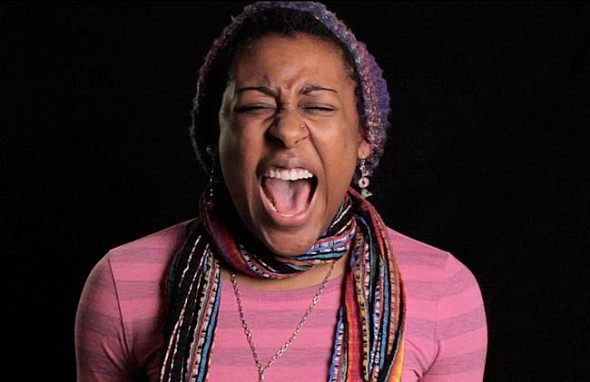 “Women Who Yell” to be shown on Thursday, June 7, at 7:30 p.m. at the Neon Movies in Dayton, as part of the Big Lens Film Festival, an annual event showcasing the creations of Wright State film students. The film was created by Megan Hague and Kyle Wilkinson, students in the production class of villagers Jim Klein and Julia Reichert. The still shows shows Ashley Morton (Submitted photo)

In Women Who Yell, 20-some 20-something women lose their cool and let the camera have it. Ranting about food, clothes, sex and more, the subjects of Megan Hague’s experimental documentary reveal profound, sometimes hilarious, moments of exasperation normally reserved for best friends, moms or maybe therapists.

Hague, a Wright State film student living in Yellow Springs, produced the short film with Kyle Wilkinson, another Wright State student. Women Who Yell and four other projects will premiere at the Big Lens Film Festival at the Neon, an independent movie house in Dayton, on June 7 at 7:30 p.m. and 9:30 p.m. The event is the annual showcase for students in the Wright State University film production class of villagers Julia Reichert and Jim Klein.

Hague’s film is an intimate group portrait to which most women — except those who really believe that women should never curse — will readily relate.

“It’s meant to be a response to media misrepresentations of women which place them in very stereotypical roles of passivity,” Hague said. “So often, their voices are not heard or even included in conversation. The flip side is, when women are angry or passionate or have a critical response, they are cast as crazy or out of control. You see that a lot in politics and in social movements. Feminists are cast as being crazy women yelling about crazy things.”

Women Who Yell is tightly edited and fast-paced and feels spontaneous. Hague makes a brief appearance herself.

Hague and Wilkerson sought subjects by posting flyers on campus and by simply asking women outright. They originally wanted to include women of all ages, but because of time constraints ended up with a piece about college-aged women. “A lot of the women had things to say that were very similar in tone and meaning,” Hague said. “A lot of women talked about body image and pressures to look a certain way. They talked about the burden of having to take care of the people around them. Other women talked about not being appreciated, not being allowed to be angry or curse. They talked directly to an ex-boyfriend, to another woman who they felt was antagonizing them, or just to society.”

Originally from Englewood, Hague moved to Yellow Springs in February. “I wanted to live in an art-friendly community. It’s just really cool and supportive, with a lot of locally owned businesses.”

It is also home to Hague’s mentors Reichert and Klein, longtime faculty at Wright State and award-winning documentarians. Hague will work with them this summer on the multimedia documentary project Localore, in partnership with WYSO.

Reichert said Hague was one of the most promising filmmakers in the program.

“She is very creative, prolific and dedicated to making work,” Reichert said. “She can not only shoot and make film and edit, she is also personable and a good interviewer.”

The Big Lens event will be the last for Reichert, who is retiring from her teaching job this year after 27 years at Wright State.

Hague’s short documentary Skate Like a Girl (also made with her film partner Wilkinson) screened at the Citizen Jane Film Festival last year. And she recently received a grant to create a short documentary about photographer Emmet Gowin, which will be part of an upcoming exhibit at the Dayton Art Institute.

Reichert and Klein have mentored all the students presenting films at Big Lens. The film program has held Big Lens almost every year for two decades.

“The filmmakers have been working on these films from one to three years. [The films] are a very big part of their lives and are usually very good and surprisingly diverse,” Reichert said. “They are all different in their style and their storytelling. It’s kind of a ride, usually, going to the screening.”

The night includes Q and A sessions with the directors, actors and crew members.

Yellow Springs native Kevin Malarkey plays the lead role in No Name #3, a short fiction film by Joe Asta and Cole Pisano. He plays a man stuck in a monotonous routine, questioning the meaning of originality.

The three other fiction films by Wright State students are Profile, about a man’s experience with the darker side of social networking; Any Other Day, about a newly homeless man who pines for his ex; and In With the New, about a divorcée who becomes close friends with another woman.