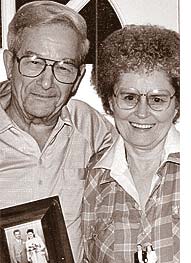 Raymond A. and Mildred Hassser

Raymond A. Hasser of Yellow Springs died peacefully on Saturday, June 9, less than two months after the passing of his cherished wife of 64 years, Mildred.

Ray was born July 16, 1921, the fifth of eight children to Aloysius and Mary (Pitstick) Hasser of Kentland, Ind.

Ray served during World War II in the US Army Air Force. He followed that with a civilian career at Wright Patterson Air Force Base, retiring after 32 years.

Ray was a member of St. Paul Catholic Church in Yellow Springs. A memorial Mass will be celebrated there for him and Mildred on Friday, June 29 at 10:30 a.m.