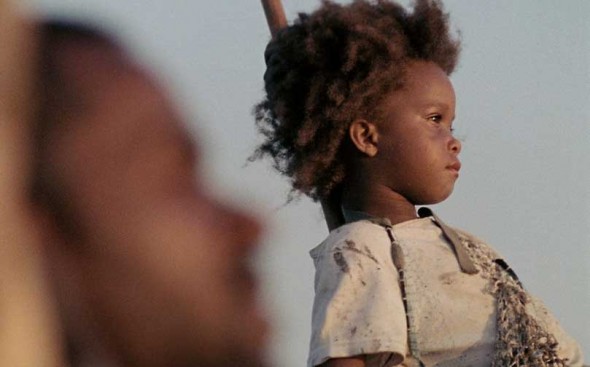 Hushpuppy (Quvenzhané Wallis) in 'Beasts of the Southern Wild'.

The first look at the afro on 6-year-old Hushpuppy squeezing chickens in her underpants and white muck boots is enough to trust her as a heroine worth watching for an hour and a half. Living in squalor in a bayou that is about to see the flood of the century, the girl must learn from her father how to stare down her demons and eek a living out of the bloated coastal community they call the “bathtub.” Though the film never states it explicitly, Beasts of the Southern Wild is born from Hurricane Katrina. Out of that morass comes this poetic and powerful story about the will to survive by tapping the body of the beast and finding the heart of the human.

The 2012 film is directed by Benh Zeitlin and written by Zeitlin and Lucy Alibar, based on Alibar’s one-act play “Juicy and Delicious.” The main characters Hushpuppy and her father Wink are played by newcomers Quvenzhané Wallis and Dwight Henry. Even with a very low budget, The film won the Caméra d’Or award at this year’s Cannes Film Festival and the Grand Jury Prize for dramatic picture at the Sundance Film Festival. The film also earned the Los Angeles Film Festival’s Audience Award for Best Narrative Feature and the Seattle International Film Festival’s Golden Space Needle Award for best director.

Beasts of the Southern Wild will continue to play at the Little Art Theatre through Thursday, Aug. 30.

For more information go to http://www.littleart.com.