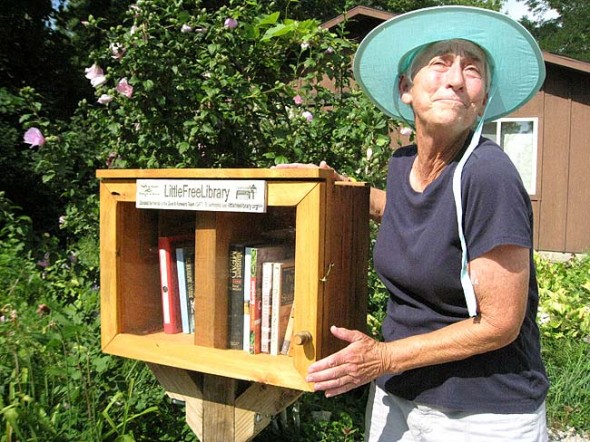 Love of reading can now be shared at a neighborhood level using the new tiny library in Moya Shea’s yard at 310 South High Street. The little library operates more like a swap: take a book, leave a book. If the cranberry crate seems too small to serve the whole neighborhood, visit the Little Free Libraries website and learn how to start a library in your front yard. (submitted photo by Susan Gartner)

The Little Library that could

Many positive things can be said about libraries, including that they can’t be too small and a town can’t have too many. Those are at least two reasons local resident Moya Shea decided to erect one in her front yard at 310 South High Street last week out of a cranberry crate with the sign “Take a book, return a book.”

That pretty much explains how it works, Shea said last week of the mini literary collection with an open swap policy. The box is perched on a post near enough to the road for bike/walk/drive-through convenience, and has already had several exchanges, including one neighbor Bill Felker made when he took a book about holographic images and left Two Zen Classics. Other titles currently in circulation include A Lion Among Men, Learning to Fall and The Tale of Peter Rabbit. Shea hopes the collection maintains as much diversity as possible to serve the interests of the neighborhood.

The library is one of hundreds of Little Free Libraries that are popping up in neighborhoods around the country, according to the website littlefreelibrary.org. The first mini book barter started out of a homemade box in Madison, Wisc., and the movement turned into an organization that sells the libraries as kits. Some are made out of recycled Eatmore Cranberries crates, which can be found in abundance in Wisconsin, where the tart red berry is the number one fruit crop. The group’s goal is to get over 2,510 libraries erected around the world to top the record held by Andrew Carnegie, according to the website, and the group isn’t far off with more than 2,000 libraries now operating in the U.S., Ghana, India and Australia.

And Shea is doing her part with Little Free Library number 2,053. She was inspired to order hers after hearing and reading about the Little Free Library in the news this spring. Friends Tom Osborne and Susan Gartner helped erect the library after Two Clowns Mowing cleared a spot in the yard, and soon neighbors were congregating there in front of the box chatting about books and lots of other things. It was what Shea had hoped would happen — that the little library would promote not only literacy but community as well.

Shea’s son Jason recalls the Yellow Springs Library being a big part of his childhood community. The library was located just across the street from his house and was the one place he was allowed to go by himself for hours at a time.

“I memorized parts of the Dewey decimal system very early on,” he said, and he always loved to read. Lucky for him the village just added one more to the approximately six libraries in the village, including several at the schools and colleges and one at the Dharma Center.

While the county library can be just as light on one’s pocketbook, the Free Library has no return policy at all, so nothing can ever be late, or worse — lost. The Free Library is a casual way for villagers to share their favorite reads and see what their neighbors have found interesting.

For more photos of the building of the library, go to ysnews.com and get the link to the Facebook page.