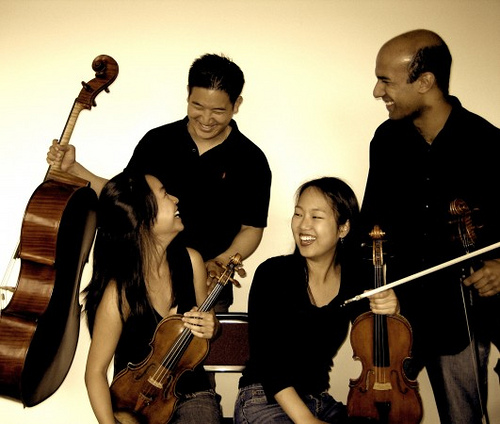 Canadians are coming to sing with their strings

The week before the Afiara String Quartet opens this year’s Chamber Music Yellow Springs season on Sunday, Sept. 30, at 7:30 p.m. at the Presbyterian Church, the ensemble will have just performed in Maine and then Calgary. When the musicians leave the village, they head to Kingston and Toronto, and by January they’re in Denmark and Sweden, then Honolulu.

But for that one night this month, the village of Yellow Springs has these world-class artists all to itself. And their sounds will make mortals worthy of the praise they seek there in the chapel.

The Afiara completed a two-year tenure at The Juilliard School in New York in 2011 and are about to embark on a residency at the Royal Conservatory of Music in Toronto. The group is the winner of the 2008 Concert Artists Guild International Competition, the 2010 Young Canadian Musicians Award, top prizes at the Munich ARD International Music Competition and the Banff International String Quartet Competition, where they also took the Szekely Prize for best Beethoven interpretation.

CMYS has also scheduled for the coming season The Calefax Reed Quintet on Nov. 18, The Vienna Piano Trio on Feb. 24, 2013, The Daedalus String Quartet on March 24, and the CMYS Annual Competition for Emerging Professional Ensembles on April 28. Season tickets are $85 for five concerts (including the competition), $25 for students (full-time with ID). They can be ordered on the Brown Paper Tickets Web site. Single tickets at the door are $20, $7 for students.