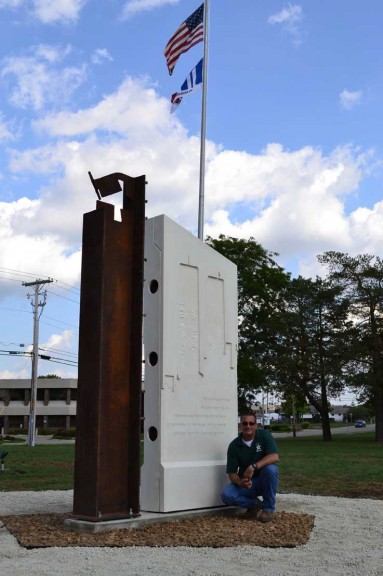 Architect Brian Carlson beside the 9/11 monument he designed in Fairborn.

Yellow Springs police officer Brian Carlson has a second life as an architect. And after his shift in the village ends this coming Tuesday, the Fairborn Memorial Monument Committee will unveil a monument he designed to honor the more than 2,700 men, women and children who lost their lives in New York City following the terrorist attack on Sept. 11, 2001. The dedication ceremony will take place this Tuesday at 8:30 a.m. at the site of Wright State University’s Calamityville medical readiness laboratory, located at 506 E. Xenia Drive, just east of downtown Fairborn along route 235.

The monument anchors a landscape design with pathways and reflecting areas that will serve as a park and the site of Fairborn’s annual 9/11 dedication, also meant to honor the handful of Fairborn City Fire Department volunteers who responded in mutual aid in 2001. The monument incorporates a steel artifact from one of the two World Trade Center towers that were destroyed during the attack. The vertical design is held up by an internal metal frame with two concrete face panels, inscribed with relief images of the towers. The inscription reads:

At the dedication, an invocation will be given by Pastor Craig Fourman of Abiding Christ Lutheran Church, followed by welcoming remarks by Fairborn Mayor Tom Nagel, a salute to fallen comrades and Taps by American Legion Post 526 with a benediction by Legion Chaplain Roger Sloan and bagpipes by retired Sgt. Del Braund.

Carlson is a full-time Yellow Springs police officer and also works as an architect at Wright-Patterson Air Force Base. A profile of him as one of three new officers at the local department will appear in next week’s News.