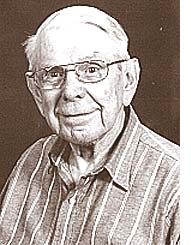 Arthur H. Pitstick of Yellow Springs died peacefully on Tuesday, Oct. 2, at Greenwood Manor. He was 95.

Arthur was born on Jan. 1, 1917 to the late Anthony and May (Gerlach) Pitstick in Bay City, Mich. Arthur served his country in the United States Army during World War II in the South Pacific, and in his later years was privileged to go on an Honor Flight with an old Army buddy he hadn’t seen in 60 years. He was the Ohio Farmer of the Year in 1958 and was the first living recipient to be inducted into the Greene County Agriculture Hall of Fame. Arthur loved traveling the United States and Canada with the Miami Valley Gem and Mineral Club.

Memorial contributions may be made to a hospice of choice in Arthur’s honor. Condolences can be forwarded to the family by visiting http://www.jacksonlytle.com.