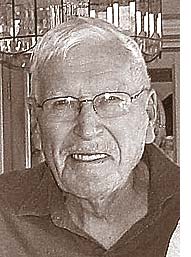 The family of William Joseph Struewing wish to remember the life of their beloved brother, husband, father, grandfather and great-grandfather, who died peacefully on Saturday, Oct. 6 at Greene Memorial Hospital in Xenia. William, known to friends as Bill, was surrounded by family and was holding the hand of Mary, his loving wife of 67 years, when he died. Bill’s generous, lighthearted and loving spirit lives on in his many friends and family members around the country, and also in the community of Yellow Springs, where he lived for most of his 87 years.

William Joseph was born on July 29, 1925 to Louis and Anna (Pitstick) Struewing, formerly of Yellow Springs. He was the sixth child of nine, and grew up with his brothers and sisters working together on the farm where they lived on Clifton-Xenia Rd. The children had fond memories of their time at the farm, and especially of the wonderful dances held at the Petticrew Lodge. As his mother recalled later in her life, “it was a home with a lot of love in it.”

Bill graduated from Cedarville High School in 1943, and went to work with his brother Art at the Grinnell Mill and at the Dayton Fire Extinguisher Company. At a wartime dance at Alford Hall in Cedarville, Bill met the beautiful Mary Hawkins of Beavercreek. Ever the bashful romantic, Bill proposed to his sweetheart on Valentine’s Day, 1945; they were married on May 16. After his marriage, Bill enlisted in the army and he and Mary moved to Fort Knox in Kentucky. When Bill was transferred to Fort Kilmer in New Jersey, Mary soon followed with their six-week old daughter, Kathy. The family moved back to Ohio after the war and built their first house in Yellow Springs, where Bill and Mary have lived ever since. From 1947 to 1955, Bill worked for Morris Bean and Company and attended Sinclair College. During this happy time, Bill and Mary welcomed children Frances, Ken, John, Cindy and Mike into the family.

In 1955, Bill began to build houses for young families and the new Yellow Springs residents who worked at Antioch College, YSI, Morris Bean and Vernay Laboratories. He had the particular pleasure of helping to build a house for his mother and father when they moved back to Yellow Springs in 1957. Bill continued to build houses — often times assisted by his sons, brothers, nephews and grandsons — in the village into the 1980s. His fine homes can still be seen around Yellow Springs today.

Bill loved his community, and was loved in return by his many friends. In the 1970s, Bill built a cottage in Michigan, where he enjoyed fishing and mushroom-hunting in the company of his brother Paul and other adventure-loving family members. Later, he and Mary began to spend time in Florida, where they eventually lived during the winters. There, they played golf, watched the seabirds, and spent time with Paul and his late wife, Helen.

Bill was an active member of the Yellow Springs Lions Club in the 1960s and 1970s, and participated in philanthropic projects around the village such as helping to build the track at Yellow Springs High School. He was a life-long parishioner of St. Paul Catholic Church — his parents’ church — in Yellow Springs.

In his later years, Bill derived great pleasure from woodworking, crafting beautiful furniture for his children and ingenious toys for his grandchildren and great-grandchildren. Whether creating quilt racks, miniature rocking horses or Christmas angels, Bill always enjoyed working with his hands and making gifts to give his family and friends.

Family was especially important to Bill, and he was a doting and devoted grandfather and great-grandfather. He loved sharing his favorite O. Henry stories with his grandchildren and great-grandchildren, reciting playful verses, mischievously tying their socks in knots, or tickling their “wips” with his whiskers. At times, it seemed that his favorite sound was the exasperated “Grandpa!” groaned by the children as they pretended not to enjoy his ornery attentions.

Visitation was held at Neeld Funeral Home in Xenia on Wednesday, Oct. 10. Funeral services will be held on Thursday, Oct. 11, at 11 a.m. at St. Paul Catholic Church in Yellow Springs. In lieu of flowers, the family asks that contributions be made to the Becky DeWine School in Haiti, c/o Hands Together, PO Box 80985, Springfield, MA 01138 and Friends Care, 150 E. Herman St., Yellow Springs, OH 45387.