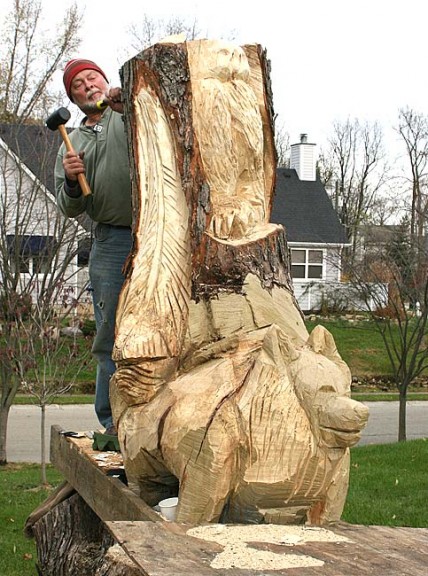 Mural artist and sculptor Greg Ackers is about 40 hours into a rendering of snow owls, a dog and feathers from a massive tree stump. (Photo by Suzanne Ehalt)

Spirit in the wood

Greg Ackers, a mural artist and sculptor from Delaware, Ohio, is about 40 hours into a rendering of snow owls, a dog and feathers from a massive tree stump for Priscilla Janney-Pace. After hearing about Ackers from a friend, Janney-Pace contracted him to carve something from the remains of a storm-damaged silver maple. The design was ultimately a confluence of efforts: she suggested the owl; he the dog, which is a likeness of Janney-Pace’s former pet, Spirit. The sculpture is ongoing; one can observe the chips fly and forms take shape on Southview Drive.