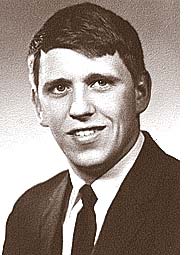 Stephen D. Thomas of Great Falls, Mont. died unexpectedly on Wednesday, Nov. 7, at a local healthcare facility. He was 63. The arrangements were handled under the direction of Croxford Funeral Home in Great Falls.

Stephen was born Sept. 23, 1949, the son of the late Norman L. Thomas and Mildred I. (Bullen) Thomas of Yellow Springs. Stephen graduated from Yellow Springs High School in 1968. In 1969, he was drafted into the service, where he spent a year in Vietnam in the Air Force. He was stationed at Pleiku Air Base. Stephen continued his military career as a mechanic for 20 more years and retired Jan. 1, 1991. He was stationed in Oklahoma, twice in Montana, in England and in South Korea. While he was stationed in England he met his wife, Gina, who was also in the military. One of his proudest achievements was receiving the Commandants Award at the NCO Academy. After working several jobs, he finally became employed with FedEx, retiring in 2004.

Stephen was a very skilled craftsman. He made numerous wooden items, including his son’s crib, bed, dining room furniture and many more items. He also made beautiful stained glass terrariums.

Stephen loved the outdoors along with fishing with his buddies, hunting, camping with his family and hiking at Mount Wright and Holland Lake Falls. He was also an avid fly fisherman. He had many fond memories of growing up as a child on his grandparents’ farm in Yellow Springs and family reunions.

Stephen is survived by his wife Gina of Great Falls; his son, Brad; his two sisters, Janet (Pete) Mitri of Chesterland, Ohio; Jeanne (Chuck) Geraci of Xenia, Ohio; nieces and nephews; one aunt; one uncle and many cousins.

At Stephen’s request, there will be no memorial services. He will be deeply missed.