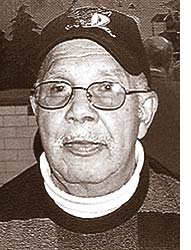 Harold “Corky” Cordell died Tuesday, Dec. 4, surrounded by lots of love and family. He was 91.

Born June 12, 1921 to the late Warren and Iola (Thompson) Cordell, Harold, affectionately known as “Corky” by family and friends, grew up in Yellow Springs with five brothers and six sisters.

Corky left high school in his senior year to enlist in the Army and was honored to serve his country in World War II; until the time of his death, he spoke proudly about his days as a serviceman, his travels and adventures. Returning to Yellow Springs after his commitment to his country, Corky began working for Porter Construction Company and married Barbara Gillim. He then went to work for Yellow Springs Instrument Company, retiring as the maintenance supervisor.

After retirement, Corky volunteered and attended most Yellow Springs school sport activities, and became known as “Gramps” to many school children. Two significant events of his life were receiving his high school diploma and going to Washington D.C. with Honor Flight, a nonprofit organization established to honor veterans. Corky was a member of Central Chapel AME church and was involved in many community activities until his health no longer permitted.

Corky was preceded in death by both parents; his brothers, Richard, Warren, Louis, Victor and Joseph; sisters Bertha, Echo and Mona and wife Barbara.

He is survived by sisters Marsha Hammond of Calif., Delores Brown (Thomas) and Carol Cockrel, both of Minn., and sister-in-law Hatsuko Cordell of Wash. Also surviving are daughters Lynn Ayers of Springfield, Jan Ganges of Evanston,Ill. and Kim Cordell-Fife of Dayton, as well as nine grandchildren, 12 great-grand children and numerous nieces, nephews and friends.

Service for Harold Cordell will be held Saturday, Dec. 15 at noon at Central Chapel AME Church. Visitation will be from 9 a.m. until time of service, with family present at 10 a.m. Reverend Timothy Liggins will officiate and Reverend Dr. John E. Freeman will serve as eulogist. Interment will follow at Glen Forest Cemetery.