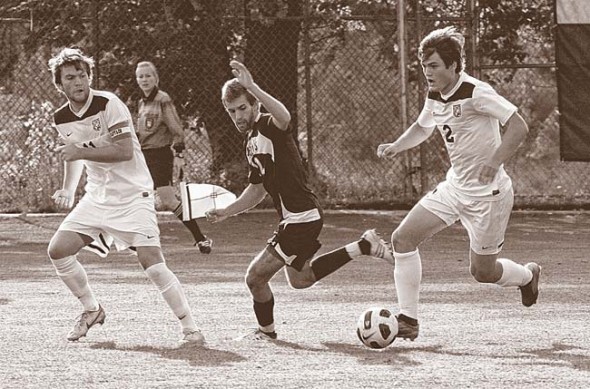 Kyle Buckwalder, a 2008 YSHS graduate and soccer stand-out, recently for the second year earned a place on the Capitol One Academic All America Team for his athletic and academic performance. He’s shown pushing the ball for Colorado College, where he will graduate this year. (Submitted photo)

Kyle Buchwalder, a 2008 Yellow Springs High School graduate and senior midfielder for Colorado College, has been selected to a second team spot on the Capital One Academic All-America Team for the second year in a row. He is one of several formerYSHS soccer players who are continuing to reap honors in college athletics.

Buchwalder became only the fifth student athlete and first soccer player in Colorado College’s history to receive the honor multiple times. A biochemistry major with a minor in Spanish, Buchwalder owns a 3.94 GPA, and in addition to his Academic All-American honors, was named to the All-Southern Collegiate Athletic Conference First Team. The senior midfielder helped lead the Colorado College Tigers to the NCAA Division III National Tournament for the first time since 2004 where they beat host, Babson, in the first round 3-1. However, the Tigers’ tournament hopes were ended prematurely in the next round by a 2-1 overtime loss to the University of Scranton. The Colorado College Tigers finished their season with a cumulative 14-5-3 record.

Yellow Springs High School has a long history of producing successful players at the collegiate level, and in addition to Buchwalder, four other ex-YSHS players are currently active in college soccer, Jacob Trumbull (2012), Ryder Comstock (2009), Alexis Onfroy-Curley (2010), and Ben Armstrong (2008).

Jacob Trumbull, a freshman at Centre College in Kentucky, appeared in 19 games this fall, starting in 14. Trumbull scored two goals, the first during a 6-0 victory over Anderson in September, and the second, a game winner against Millsaps two weeks later. Centre won the Southern Athletic Association title and qualified for the NCAA Division III tournament for the first time since 1999. Trumbull and the Colonels knocked out defending national champions Ohio Wesleyan in the first round with a 2-1 overtime victory then fell to number 19 Wheaton, 2-0.

When asked how college and high school soccer compare, Trumbull noted that “Balancing the physical demands of college soccer with the high academic standards can be very challenging. The speed of play and the physicality are also turned up several notches.”

Had Colorado College and Centre College continued to advance in the Division III tournament, Buchwalder and Trumbull would have met in the NCAA Division III Men’s Soccer Tournament Semifinal in San Antonio, Texas.

Ryder Comstock attends Earlham College in Richmond, Indiana. The senior forward started in each of the Quakers 19 games, earning 10 goals and two assists along the way. Most notably, Ryder scored three times in one weekend, twice in a 2-1 victory against Capital, and once in a 3-1 victory over Millikin, earning her the title of Heartland Collegiate Athletic Conference Player of the Week. The Quakers finished the season with a record of 12-5-2, after winning the regular season HCAC conference title but narrowly falling short against Transylvania University in penalty kicks during the HCAC tournament championship. To cap off the season, Ryder was selected to the Tom Bohlsen Academic All-Heartland Collegiate Athletic Conference Team.

Despite being injured for much of the season, Alexis Onfroy-Curley, a junior midfielder and defender for the University of Chicago Maroons, earned an honorable mention to the 2012 University Athletic Association All-Association Team. Onfroy-Curley made 12 appearances for the Maroons, starting 10 times, and scored a header off a free kick in a 3-4 loss at Emory University in late September. The University of Chicago closed out the season with an 8-4-5 overall record.

After a successful first season at Wilmington College, in which he was awarded with Defensive Player of the Year, junior Ben Armstrong transferred to Lee University in Cleveland, Tennessee. In his first year playing for the Flames, Ben appeared in 11 games, assisting on one goal. Next year, the Lee University Flames will move from the NAIA Division I into the NCAA Division II, pending acceptance by the NCAA.

Former Yellow Springs soccer coach, Jim Hardman, who is currently living in Denmark, had this to say about his players. “I am humbled by their accomplishments at the college level because what each one of them is doing affirms what I saw in them all those years ago when I asked them to boot up for FC Springs. I have been following all of their games online from Denmark, eagerly reading about every result that I could find online…I feel like a grandparent who follows the exploits of their grandchildren from afar and takes great pride in everything that they accomplish. I’m not surprised that every one of these players has contributed in a huge way to the success of their respective college teams.”

It was my pleasure to work with every one of them, not only throughout their soccer careers at YSHS, but even before that through many seasons with the FC Springs squads.”

* The writer is the brother of Kyle Buchwalder and lives in Yellow Springs.