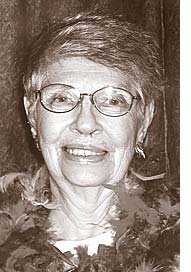 A longtime resident of Yellow Springs prior to transferring to the Fairborn facility in 2010, Joan was born to the late Lee and Elsie Arganbright in Armstrong Grove, Iowa, on Dec. 6, 1932. She worked as a hairdresser in Springfield during the years that her late husband worked at Navistar. In Yellow Springs, Joan was quite active in several churches and had many good friends.

Joan has donated her body to Wright State University and there will be no services. The family would like to thank Friends Care Community, Wright Nursing and Rehabilitation Center and Crossroads Hospice for the wonderful care they provided.