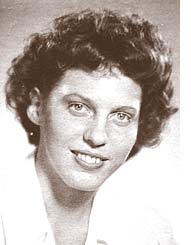 Donna May (Fink) Fulton Mathiasen died Sunday, Jan. 13 in Yellow Springs. She was 86. Donna had been a resident at Friends Care Community in recent years.

A native of Yellow Springs, Donna lived here for many years with her first husband, Richard E. Fulton, also of Yellow Springs. Following his death after 54 years of marriage, she subsequently married Robert Mathiasen and lived in Florida until his death, at which time she moved back to Yellow Springs.

In addition to her husbands, Donna was preceded in death by her older sister, the late Edith Ann (Fink) Bowles. She is survived by her sister Alice J. (Fink) Allen of Yellow Springs, brother Robert W. Fink of Sparks, Nev., and numerous loving nieces and nephews.

A private family service will be held, with Donna’s ashes spread at her desired locations by her family members.

Donna’s family would like to extend a special “thank you” to the employees at Friends Care Community and VITAS for their care and assistance.