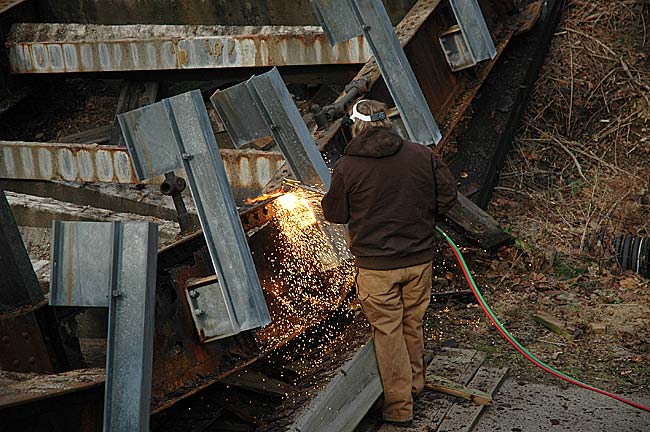 A Greene County road crew member took a blow torch to the steel girders to dismantle the bridge last week.

The Hyde Road bridge that was built to span over the railroad and now forms a little overpass above the bike path will be torn down this month. The Greene County Engineer’s department inspected the bridge and found it unsafe for traffic. The county closed the bridge on Monday, and estimates it will take about a year to replace.

The Hyde Road bridge may have been built as early as the railroad, which was completed in Yellow Springs in 1840, according to Antioch College Archivist Scott Sanders. The bridge has been restored many times, according to Greene County Road Superintendent W.T. Caldwell, and has now reached a point that it is no longer salvageable. The concrete walls on either side of the bridge are crumbling, the steel girders spanning the three sections are rusting away, and the wood decking is rotting. The former load limit on the bridge was three tons, but Caldwell believes the bridge is no longer able to hold that weight.

The county estimates it could be late fall or early winter before a new structure is complete. The crew needs good weather without snow and ice to dissasemble the old bridge, with the help of a crane to lift the three sections from underneath. That process is expected to be complete in the next few weeks. 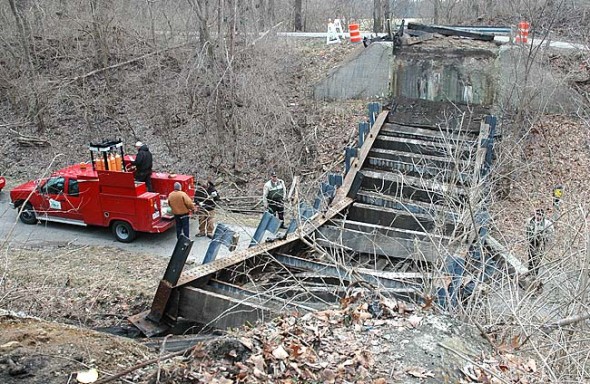 One Response to “Greene County to replace Hyde bridge”