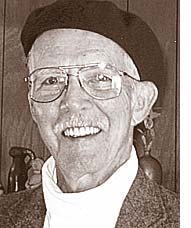 Oscar Peters of Yellow Springs died Jan. 6 after a short stay at the Hospice of Dayton. He was 94.

Oscar graduated from Stivers High School in 1937 and married a fellow graduate, Phyllis Pottle, who died in 1997 after a prolonged illness.

He worked many years for the Dayton Power and Light Company, starting as a telephone operator during the Depression years, ending up supervisor of the system operating department. Whenever there was an outage in the DP&L electric service, he was in charge of making sure that it was corrected and that lights would go back on. What he didn’t know at that time was that, while he was working inside, outside, among a crowd of environmentalists picketing DP&L about its air pollution, was his sign-carrying future wife, Gertrude Chasens.

After Oscar retired, he kept busy in various ways. He was mayor of the lovely little town of Wayne Lakes in Darke County. His love of books led him to serve on the New Madison Public Library Board. In 1999, he married Gertrude Chasens and moved to Yellow Springs, where he joined others working as a volunteer for the Friends of Planned Parenthood in Dayton, sorting and pricing donated books for their annual book fair.

He is survived by his loving wife, his daughter, Bonnie Klosterman, two granddaughters, Jennifer Rasche and Kristin Lopez, one grandson, Ben Klosterman, two stepdaughters, Caril Chasens and Eileen Chasens Blumenfeld and a number of great-grandchildren.