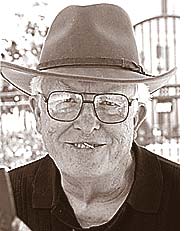 Phil Keith McQueen died of natural causes at Emerson Senior Living in Meridian, Idaho, on Dec. 22. He was 81.

Phil was born on Jan. 17, 1931 in Phoenix, which seemed appropos to his insatiable love of heat, for which his wife nicknamed him the family “desert rat.” Despite being painfully shy in school, with his sister’s dance tutelage and his ability to listen to others, Phil was voted best dancer of his class and into the shared position of class president at Meridian High. He completed graduate school at Florida State University in 1964 and was a Korean War veteran.

Phil had a dry sense of humor and a touch of mischief in his eyes. He shared his many loves of swimming, music, cars, jigsaw puzzles, photography and card playing with family and friends over the years. He enjoyed politics and a good crispy fish fillet smothered in malt vinegar. Many have noted his fun-loving ways and his ability to help them find comfort in difficult times. He and his wife raised four kids, living in various cities around the country, including Yellow Springs from 1967–1976, then retired to their earlier roots in Boise, Idaho in 1998.

Phil often stated how proud he was of his children and grandchildren. He especially loved listening to all they had to share about themselves and how they viewed the world. He felt lucky to have a wife whom he credited with making their homes warmly inviting and filled with great food. In their retirement years they continued to enjoy activities together and with loved ones. He doted on the family cats, brushing their coats or taking a nap with one in his lap.

Phil never tired of road trips, as tour guide or passenger, to see the beauty of nature and sites around the Treasure Valley. In the past year of his life, through art therapy, he discovered painting, producing many pieces now treasured by family in his memory. He will be sorely missed.