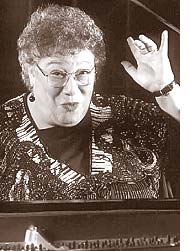 Born in New York City, Ann Rabson moved with her family in 1953 to Yellow Springs, where her father, Gus Rabson, taught mathematics at Antioch College. She attended the Antioch School and Bryan High School. It was while in high school at age 17 that she began playing guitar, influenced by blues performers Big Bill Broonzy and Memphis Minnie. She didn’t begin playing piano, her major instrument, until almost three decades later. Being ambidextrous, she developed a powerful left-hand bass line to become a highly skilled and much sought-after boogie-woogie pianist.

After moving in 1970 to Fredericksburg, Va., she was giving guitar lessons there in the early 1980s when she and two of her students formed the trio Saffire: The Uppity Blues Women. The music they composed and performed often had erotic references and feminist lyrics, with such titles as “Silver Beaver,” “Dump the Chump” and “I Ain’t Gonna Hush.” The band became a major hit with fans locally and around the world, recording several CDs with the Chicago-based blues label, Alligator Records. Saffire was on the road around 300 days a year, performing throughout the U.S., in Europe, Hong Kong, and Australia. The band separated amicably in 2009 so that each of the members ­— Ann, vocalist Gaye Adegbalola and mandolin-player Andrea Fay ­— could begin solo careers.

Ann continued to sing to her own piano accompaniment throughout the country and abroad, including a recent performance at the Yellow Springs Blues Festival, until 2012. She died peacefully in her sleep on the night of Jan. 29, after a long struggle with cancer. Her CD “Not Alone,” with guitarist Bob Margolin, has been nominated for a Memphis Blues Foundation Blues Music Award, for Best Acoustic Album of 2013. She is survived by her daughter Elizabeth and granddaughter Georgia in Brooklyn, N.Y. and her brother Steve, currently living in Fredericksburg, Va.

One Response to “Ann Rabson”