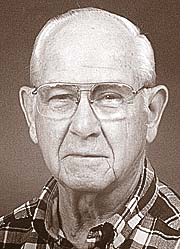 Born on Dec. 5, 1920, in Fairfield-Osborne (now Fairborn), Chester was the son of the late Myles A. and Cora Young Davis Hull.

As a teenager, Chester loved to run track, but had to quit school when he contracted tuberculosis and was placed in a sanitarium. When he returned to John Bryan High School, he became class president — twice. During World War II, Chester was employed by the Frigidaire plant in Dayton, which had begun to make machine guns. Chester’s job was to take these guns apart and put them together to make sure that they were.

Chester was founder and first owner of the Yellow Springs Safety Cab Co. He delivered groceries to homes from Lutrell’s grocery store, delivered parts to the airport from Morris Bean and even served as an ambulance taxi once, transporting an injured community member from a car accident in the village to the hospital.

Chester retired from Yellow Springs Instruments, where he worked as a purchasing agent, 20 years ago. He loved motion photography and climbed many tall, unsteady towers to film YSHS football games. He enjoyed woodworking and built his first home on 155 Brookside Drive 50 years ago, and it still stands there today. Chester built a large barn, by himself, at his last village home, off Yellow Springs-Fairfield Road.

Chester loved people, and in his later years, sat on his porch in Virginia Beach to smile and wave at neighbors who passed by. These neighbors often said that this gesture from a 92-year-old man made their day.

In his high school yearbook, Chester was given a nickname that family have never quite understood: “Killer.” Knowing him to be a very gentle man, family members previously assumed that this nickname was a sarcastic commentary on his friendly character. Recently, however, former classmates have informed Chester’s family that he liked to get cleaned up and dress nicely for dates with Susie, the future mother of his children. He was, in fact, a “lady killer.”

Private graveside services were held in Yellow Springs on Thursday, Feb. 14. Condolences may be shared with the family via the online guestbook, which may be found by visiting http://www.familychoicefunerals.com/obituaries and searching “Chester Davis.”