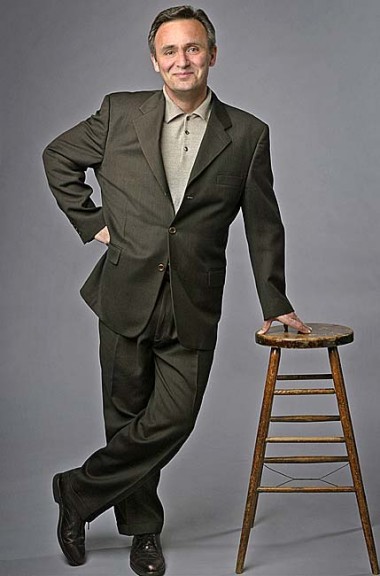 The Antioch School will host Stand-Up Dads comedian Milt Abel during the school’s big fundraising event and silent auction on Saturday, March 23, at Antioch College’s east and south gym. Guests are asked to rsvp by March 11 to attend the event, which also features food, a live auction and raffle giveaway. Submitted Photo by Owen Carey

Antioch School older group students Carter and Selah Griffin love going to school. According to their mom, Liz Griffin, her children take ownership of their learning, which gives them confidence in themselves and the urge to keep discovering. The Antioch School is one of the main reasons the Griffins moved from the Philadelphia area to Yellow Springs five years ago, and the family receives financial help from the school’s scholarship fund in order to keep their children enrolled.

The Antioch School offers the kind of education its leaders want to make available to every child, and the school’s scholarship fund is an important way to open doors for families of all economic means in the region, Development Director Beth Bridgeman said this week. The fund got a big push last year when the school’s main fundraising event featured a comedian to liven things up. And the school aims to do the same thing this year for its annual Antioch School Silent Auction, featuring comedian Milt Abel of Stand Up Dads comedy company. The event takes place the Saturday, March 23, at 6 p.m. in both the south and east wings of the Antioch College gymnasium. The cost is $50 per ticket, and as last year’s 250 seats sold out, participants are asked to reserve a place no later than March 11.

Abel, who lives near Portland, Ore., focuses his stand-up material on his family life and role as a father and husband. His promotional material available online includes routines about how a parent can end up in the hospital after being gouged in the mouth eating Cap’n Crunch cereal, and one about hearing his wife translate toddler talk and feeling he was in an episode of “Flipper.” Abel also talks about his “blind, dyslexic rooster with a tremendous sense of duty” and the lack of control one feels in an airplane where, when you see the wing fly off, all you can do to call for help is hit the “ding” button.

The stand-up show at last year’s auction helped make the event more successful than ever, doubling the amount the school was able to distribute for aid to about $51,000, according to Antioch School Manager MJ Richlen this week. The support will go a long way toward increasing retention and allowing students who start at the school to continue, Richlen said. About 23 of the school’s 61 families receive financial aid for the tuition of $9,000 per student, Richlen said.

In addition to the headliner show, this year’s event will start with heavy hors d’oeuvres, a wine bar and a silent auction in the east gym. The party will then move to the south gym for a live auction, featuring more lavish items such as a week stay in Buenos Aires, a week in Nantucket, time in a cabin in the Poconos and a hot air balloon ride. Special homemade cupcakes, desserts and coffee will follow the show.

The location of the event honors the Antioch School’s roots with the college, which opened the school as the laboratory for the college’s education program in 1921. The school became independent in 1979, but student teachers continued to get their first experience at the school for many years after. And the college is currently sponsoring a Morgan Fellow to help at the school. The event may be one of the old gym’s last public openings before a major renovation is expected to take place.

The Antioch School’s beginnings shaped its development into the place it is today, with a nursery program, a kindergarten, a younger group, an older group, and an art and science classroom, where children are encouraged to explore their own interests within the structure provided. Bridgeman, whose children graduated from the school before continuing on at McKinney Middle School, notes that time is different at the Antioch School. Many of the children she knows today say they feel that time goes by so fast, and they feel frantic to keep up. But at the Antioch School, time is slower, and the kids there seem to reflect that calm in their activities.

“The school  hums here during the day, it’s very harmonious, and it feels slow that way that childhood used to feel — like it was endless,” Bridgeman said.

Part of the proceeds from last year’s  fundraiser also went to the school’s two endowment funds with the Dayton Foundation, the Endowed Scholarship Fund and General Endowment Fund. This year the school also began a Bridge Scholarship, an unfunded award in the amount of one year’s tuition and fees, to further assist families with an initial financial aid award beyond their anticipated need.

Lastly, during next month’s fundraiser the school will announce the winners of a raffle for four plane tickets to anywhere in the continential U.S. Raffle tickets are on sale now for $20 per ticket or six for $100. To participate in the raffle or to make reservations for the fundraiser, call the Antioch School at 767-7642.