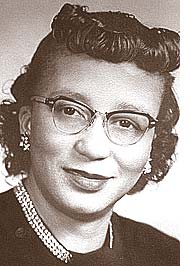 Rosie Lee Jenkins passed away Monday, Feb. 18 at her home in Dublin, Ohio where she lived with her daughter, Helen Starks.

Rosie L. Davis was born on May 26, 1919 in Griffin, Ga., the daughter of Carrie Lou and Robert Davis. She was united in marriage to Chester Jenkins in 1940 in Columbus.

Rosie was employed at Community Hospital, where she worked as a cook for 25 years until she retired. She had an unwavering faith in God. She was an active member of The Church of God Sanctified in Springfield, and a member of Sisters Masonic Temple prior to moving to Columbus, where she attended a number of churches with her family and friends.

Rosie was preceded in death by her husband of 40 years. She was also preceded by her daughter Geraldine; four sisters, Ruby Johnson, Erma Griffin, Onevia Johnson and Mary Harris; three brothers, Eugene, Henry and Robert and granddaughter, Roxanne Tolliver. She is survived by her children and their spouses: Helen Starks of Dublin, Chester Jenkins (Butch) and wife Peggy of Columbus and Betty Peterson and husband Michael of Yellow Springs. She is also survived by seven grandchildren, 14 great-grandchildren, 13 great-great-grandchildren and a host of nieces, nephews and cousins.

Funeral services were held for Rosie on Feb. 26 at Second Missionary Baptist Church in Springfield.