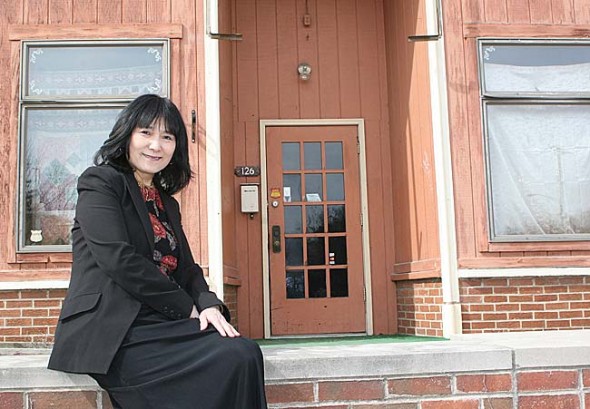 After serving spring rolls, fried rice and General Tso’s chicken for nearly 10 years from a cozy cove on Dayton Street, Chen’s Asian Bistro closed its doors at the end of March. According to owner Jenny Chen, she and the property owner could not come to a lease agreement. So two weeks ago, Chen emptied the site of all the equipment she installed over the years to make her restaurant run and shoved it into storage. She is considering opening the business in a different location in Yellow Springs.

Chen opened her business in 2004 at the Dayton Street location, which at the time was not outfitted for food service. Having previously owned several large-scale Chinese restaurants in the Dayton area, Chen knew what she needed to equip a small restaurant, the village’s first Chinese restaurant. She ran new water lines for the sinks, replaced the water heater, and installed a commercial kitchen with a grease trap, powerful vents and upright freezers. She also opened up a few walls to make the space more convenient for customers, as well as house an office, a pantry and a cleaning supply closet.

Chen ran the business successfully for many years, attracting customers such as Xenia residents Steve Joyce and Peter Camacho, who have been coming to Chen’s for over three years to dine at Chen’s and spend time shopping and socializing in the village. Camacho comes for Chen’s spicy eggplant, Mongolian beef and whatever else she’s serving.

“Everthing Jenny makes is my favorite,” Joyce said this week.

But they love Chen’s as much for the food as Chen herself, who greets every customer who walks in the door and usually knows what they want too. Other regulars gave their testimonies on food review websites. Posted on TripAdvisory.com in 2012, one Chen’s customer wrote, “Jenny cooks from her heart…made me feel like I was at home.” Another wrote, “Everything is fresh and delicious…the only thing that surpassed the food was the warmth and friendliness of the owner, Jenny. I cannot recommend this restaurant enough.”

But Chen’s suffered when the economy soured in 2008, and the following year her business and life partner, Eric Seimer, died. Due to the stress the business was under, property owner Lisa Cermele, of CB Property Management, agreed to reduce Chen’s lease, Cermele said this week. The rent remained at that level until about a year ago when the lease lapsed, and the restaurant began renting month to month.

But starting last summer, Cermele began asking to renegotiate the lease to reflect what she said was a more reasonable rate for that 1,600-square-foot location. For personal reasons, Cermele said, she needed to refinance the building, which housed Chen’s and two residential apartments upstairs. And the bank needed to see the units rented with term leases, not month-to-month agreements.

According to Chen, when she started out the lease was $1,050 per month, and it increased by $100 every year. In comparison,  Starflower Natural Foods, with a 1,000-square-foot space on Dayton Street, rents for $1,250 a month. But Chen also invested about $30,000 in the property, she said, to create a commercial restaurant in a space that was formerly a clothing store.

Chen said she was willing to sign a new lease but not under the terms proposed, including an annual increase and collateral liens on her personal property (restaurant equipment), all of which she purchased and installed herself. Though Cermele denied any knowledge of having proposed a lien on Chen’s property, recent email correspondence between the two shows that a lien was proposed and that Chen refused to agree to it.

Chen did not want to close a business she worked 10 years to build, she said. She was happy in her location and felt a loyalty to her customers and those in the village who have supported her through both good and challenging times.

“I didn’t want to leave without saying goodbye,” she said last week.

But when it became clear that an agreement could not be reached, Joyce and Camacho helped Chen pack her things to close. She still maintains a home in the village, and once she recovers from the transition, she wants to look for another place to open.

“I’ve been here 10 years, while all these other businesses have come and gone,” she said last week, suggesting that restaurant work is in her blood. If she does choose to continue, Joyce and Camacho are prepared to help.

“We’re staying positive and hopeful for Jenny, and we’re open to whatever is meant to be,” Camacho said.