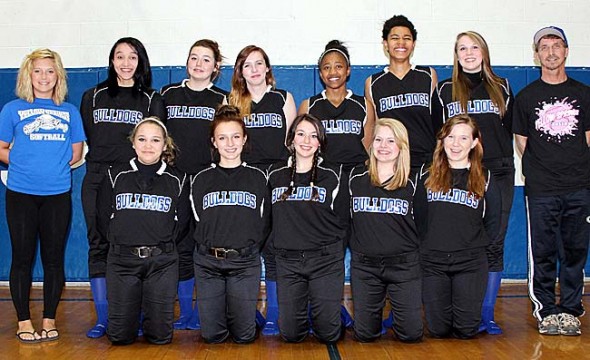 Seniors shine in first track meet
At a varsity track meet over spring break — the Bulldogs’ first competition of the year — a a trio of seniors won first in their specialty.

Angela Allen tossed the discus 93´2˝, well past her competitors. Alex Brown blazed ahead of a large field to take the victory in the 1600-meter run in 5:42. And Lois Miller claimed first in the 3200-meter race with a fast season-opening time of 12:07.0.

On the boys side, Roland Newsome was the squad’s lone winner with a victory in the long jump. Newsome flew 18 feet and a half inch for the title. Eli Biggs followed up with a third place leap of 17´6˝. Kaner Butler was third in the 110-meter high hurdles in 18.8 seconds and fourth in the 300-meter hurdles in 50.8. He also added a point with a fifth-place leap in the high jump at 5´0˝. Bryce White was fifth in the 100-meter dash in 12.2 to complete the individual scoring. The men’s 4×100 and 4×200 relay squads each took 4th place.

YSHS softball returns eight
After finishing a season for the first time in over four years last year, the YSHS softball team begins this season with eight returning players and a fresh outlook.

“Last year our team was very inexperienced so our goal was to field a team, get some playing experience on the field, learn how the game is supposed to be played, and come back the following year and apply some of that knowledge,” second year Coach Jimmy DeLong said.
According to Coach DeLong, the biggest difference will be in the pitching, as three girls come into the season with some experience. One of them, junior Sierra Lawrence, figures to get the bulk of the innings on the mound as she spent the off-season taking pitching lessons.

“Sierra has worked really hard in the off-season and has developed a nice fastball and change-up,” DeLong said. “She’s still learning and needs experience on the mound but she has the work ethic and has been improving every day and I am real pleased with her results.”

The other two pitchers will be sophomores Maddie Gueth and Jesi Worsham. Gueth “throws hard and has unlimited potential on the mound,” DeLong said. Worsham just started pitching during the preseason but she has already developed solid mechanics that should translate into an ability to throw strikes on the mound, according to DeLong.

Even without seniors, the team has plenty of experience. Sophomore Chelsea Horton moves from catcher to first base. Horton hit .296 with a .387 on base percentage last year. Sophomores Modjeska Chavez and Jesi Worsham will play second and short for the Bulldogs. Chavez has developed into solid infielder while Worsham has the quickest hands on the team, Coach DeLong said. Last year Worsham led the team with a .533 on base percentage. Sophomore Evelyn Greene, with a naturally strong arm and improved footwork, returns to third base.

Catching will be manned by first year player Hannah Brown. And rounding out the team are outfielders Gueth, Cali Dillon, Sarah Jako and newcomers Mar’ria Miley, Brianna Ayers, and Rachel Orme. The team is coached by DeLong, Shannon DeLong, and Leanne Holmes.