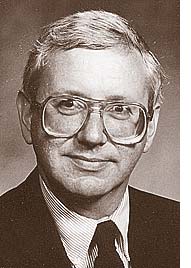 Born May 10, 1935 in Buffalo, N.Y., the eldest son of the late Harry H. and Lillian O. (Morrison) Simms, Gordon was a graduate of Taft Academy in Connecticut and Middlebury College in Vermont, studying geology. Gordon worked with the family business, Jamestown Veneer and Plywood. He had been a production woodworking machinery salesman prior to being the founder and President of both Simms Machinery and Kiika International. He was a member of First Presbyterian Church, where he sang for 30 years in the choir, and a member of York Downtown Rotary, and Regents Glen Country Club. He also sang with the York Symphony Chorus. In Annapolis, Md., he and his wife sang in the St. Anne’s Episcopal choir for 13 years, as well as with the Bachmeister Singers

In addition to his wife, Mr. Simms is survived by two sons, Daniel L. and wife Vanessa, Simms of Dallastown, and William H.H. and Beth Simms of Red Lion, Pa.; two daughters, Elizabeth S. and husband Dan Rudolf and Kathleen M. and husband Jon Rudolf, both of Yellow Springs; 10 grandchildren and a brother, John E. Simms and wife Barbara of Jackson, Wyo., with three nieces and children.

A memorial service will be held at a later date. Private burial will be in First Presbyterian Church Memorial Gardens.

Online condolences may be made at http://www.BestLifeTributes.com .