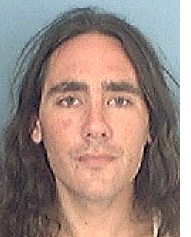 UPDATE May 8, 9:40 p.m.: At 8:40 this evening Xenia police arrested Oliver Simons at his home at 290 E. Market Street in Xenia, in connection to a string of burglaries in Yellow Springs. According to Police Chief Anthony Pettiford, police also arrested Bianca Stone, who also lives at the Xenia residence. Simons is being charged with burglary, and Stone will be charged with receiving stolen property. Both were taken into custody and are being held in Greene County Jail.

No one else was home at the time of the arrest, and police do not at this time suspect any other accomplices, Pettiford said.

At the residence police found jewelry, cash, drugs and drug paraphernalia, all of which they recovered as evidence in the ongoing investigation.

Simons and Stone are both former residents of Yellow Springs. They will wait to be arraigned by a Greene County grand jury.

1 p.m. May 8: On Tuesday night, May 7, Yellow Springs police and the Greene County ACE Task Force raided the home of a suspect they believe is responsible for the series of residential burglaries that have occurred in the village over the past five months. The suspect, Oliver Simons, former village resident who currently lives at 290 E. Market Street in Xenia, was still at large as of Wednesday morning. Police issued a warrant for his arrest yesterday.

Simons is the chief suspect in the investigation of a string of daytime burglaries that have taken place at various addresses throughout the village since January. Police do not believe him to be dangerous, but according to Pettiford, he has a criminal history involving illegal drugs. They believe that narcotics may have been present at the home in Xenia.

The ACE Task Force has been involved in the investigation since the burglaries began in January. The evidence police have gathered about Simons “puts him in several houses” in the village, Pettiford said Wednesday.

Visit ysnews.com for continuing updates on the story.

Read the initial police press release of Wednesday, May 8, here.