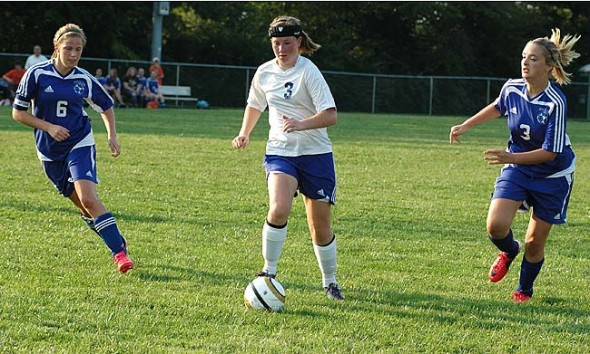 Fulton to play soccer for Heidelberg

Yellow Spring High School senior Keturah Fulton will play college soccer next fall at Heidelberg University in Tiffin.While she also excelled at basketball and track at YSHS, Fulton looks forward to competing in a sport she has played since age five.

“It’s what I love to do and I have fun when I do it,” Fulton said of soccer. “It’s my true main sport and all the other have been filler in the off-season.”

Fulton chose the Division III school in Northern Ohio because of its beautiful campus, small town feel and soccer team camaraderie. She received a partial academic scholarship and plans to major in athletic training.

The two-time first team all-conference athlete secured her spot on the team despite the fact that the YSHS girls soccer team didn’t win a single game this season. To develop, she played for area travel teams, including the local boys team FC Springs 95. She is currently a member of the Springfield Thunder.

“Just because my high school team didn’t win any games this year doesn’t mean we don’t have good players,” Fulton said. “You can’t base everything about a player just because of their team…But making first team all-conference in a school that’s not known for soccer — that’s big.”

Fulton can play anywhere on the field, but prefers the sweeper position because she loves “the thrill of being the last person just before the goalie,” she said. She chose athletic training because she has a long history as an “injured kid,” having suffered sprained ankles, a broken foot and two concussions during her soccer career.

“All of the visits to the trainer got me interested in how the body works and how you can prevent things and help athletes from injuring themselves,” Fulton said. “It’s the happy medium that I can still help people and I’m involved in sports.”

Fulton recalls her favorite memory from YSHS soccer: sidelined while recovering from a broken foot and sprained ankle during sophomore year, Fulton hadn’t touched a soccer ball in months. Coach Sarah Wallis, confident in her young player, sent her into the game where the Bulldogs were losing. On Fulton’s first touch, she took the ball down the sideline, dribbled past a defender and kicked the ball into the back of the net. It was the team’s first goal of the game and a dramatic return to action.

Participating in high school sports has helped Fulton to be a more responsible student and better able to juggle academics, athletics and social life, she said. And she has no regrets at sticking with the YSHS soccer program.

“I do wish I went to a more competitive place, but you’re not going to find the coaches at Yellow Springs at another place,” she said. “There are not coaches [elsewhere] who are more caring and understanding.”