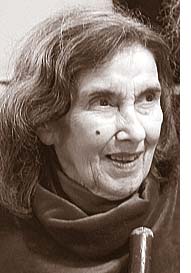 She was born in 1931 in Lincoln, Neb. Both her parents were writers, and her father was professor of English at the University of Nebraska. Her public education, received in Lincoln; Winnetka, Ill.; and Shelton, Wash., included years of the Great Depression and World War II. Her college career at the University of Washington and Reed College coincided with the political hard times of the ’50s.

Alison was a feminist. Her struggles as a feminist began early, nearly in the very beginning. She had a love of language: spoken and written, people talking, the sounds, meanings and humor of words. In conversation or in writing, she made her points with deliberation, drawing upon a vast vocabulary gleaned from hours of reading and a lifetime of interest in the use and meaning of language.

As her husband of 63 years wrote for the book commemorating the YS Women’s Park: “Alison and her family, including her husband Martin and three daughters, came to Yellow Springs in 1961. Alison remained here until 1975, partaking of the amazing life of town and college. She contributed, as always, to literacy, the nurture of human communication. And again, as always, she stood fast for the complete liberation of women.”

In the mid-1970s, Martin and Alison left the academic life of Antioch College and moved to an old dairy farm in northern New York. There they took up a life of conscious simplicity, one they could reconcile with their strong belief in leaving a light footprint on the earth. They grew gardens, raised animals, rebuilt decaying walls and outbuildings, hauled water and chopped firewood, made friends with like-minded people living nearby. Alison’s ingenuity, frugality and creative hands were employed everywhere, inventing household tools and improvements. When she taught herself to weave, the house bloomed with pattern and color as walls, floors, furniture, Martin and she began to wear her weavings.

Alison will be best remembered for her lifelong commitment to social activism and her staunch belief in human rights and the equality of all.