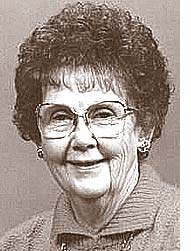 Patricia E. Johnston, age 92 of Fairborn, passed away Saturday, June 8, in the Trinity Community of Beavercreek. She was born March 17, 1921 in Urbana, the daughter of the late Gurnea “Jack” and Esther (McGovern) Comer.

Patty graduated from high school in 1939 in West Liberty, Ohio, and possessed many farming and homemaking skills when she married her husband, Dick, on Aug. 12, 1941. Together, Patty and Dick operated the Homestead Farm in Greene County beginning in 1951. The farm was established by Dick’s family in 1805. She and Dick were members of the Grange and Farm Bureau, and enjoyed time spent with fellow Farm Bureau members and neighborhood friends.

Patty’s greatest joy was her family; and she was truly the most loving wife, mother, grandmother, great-grandmother and mother-in-law. Her family wishes to extend their gratitude to the Trinity Community for the care provided to Patty and to the many family and friends who prayed for her in her final months.

A funeral service was held on Wednesday, June 12 at the Belton-Stroup Funeral Home in Fairborn, with Pastor Ward Hilton officiating. Burial was in Fairview Cemetery in West Liberty, Ohio. Condolences may be made to the family at http://www.veltonstroup.com.