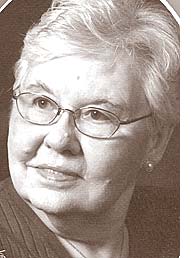 Mary was born July 3, 1926 in Ottoville, Ohio to Theodore and Bernadine (Hellman) Beining. She was united in marriage to Herbert Hempfling of Delphos on July 2, 1949.

Mary worked at Meyers Cleaners and at the Drapery Stitch, and was a member of St. John’s Catholic Church. She volunteered at a local nursing home, St. Rita’s Medical Center and the Delphos Thrift Shop. Mary enjoyed sewing, playing cards and gardening. She loved spending time with her family.

Mary was preceded in death by her parents; a son, Terry Hempfling; by sisters Mildred Beckman, Angela Kimmet and Gertrude Schmitz and by brother Rudy Beining. Mary is survived by sisters Alice Arnzen of Delphos and Irene (Joe) Schroider of Ottawa, Ohio; by brother Ray Beining of Delphos; by daughters Judy Hempfling of Yellow Springs and Mary Lou (Keith) Pohlman of Delphos; by son Jack (Sandy) Hempfling of Le Roy, N.Y. and by daughter-in-law Agnes Hempfling.

Funeral services, officiated by Father Dave Reinhard, were held Wednesday, July 17 at St. John’s Catholic Church. Memorial contributions may be made in Mary’s name to the St. John’s Parish Foundation. Condolences may be made to Mary’s family at http://www.harterandschier.com.