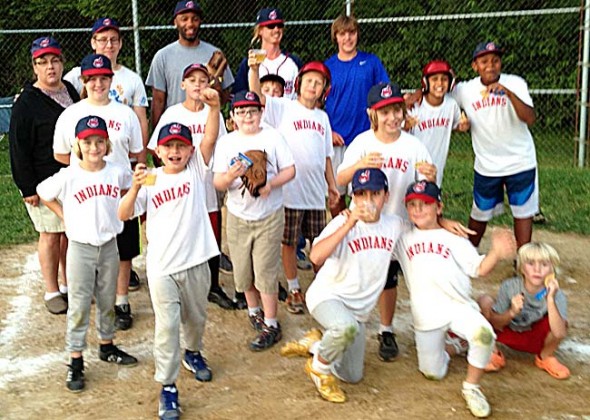 The Minor League Indians finished out the season last week as league champions with a 12–0 undefeated record, and then just held off a surging Pirates team to also take the post-season tournament championship on Sunday evening.

The Pirates began the week by winning only their second game of the season by overtaking the Dragons 9–6 on July 23. The Dragons’ Gage Kostrzewa and Eamonn Cary scored in the first along with Henry Smith-Heston, who added two more runs, and Liam McClean, who scored once. Down 5–0, the Pirates exploded for six unanswered runs in the third from Malcolm Blunt, Ty Thompson, Jay Millman, Vaughn Hendrickson, Liam Hackett and James Benton. Hendrickson and Hackett also added one more run each for the Pirates in the fourth inning to insure the win.

The Indians and Reds then faced off in what turned out to be the final regular season game on July 24, with the Indians prevailing 17–7. DeAndre Cowen’s pair of base hits and two doubles led to three runs scored, with Dimitri Wallace also scoring three times off two singles and a pair of triples. Todd Foster scored twice, including a two-run homer and a triple and Pete Freeman and Deena Green both scored twice, while Josh Clark, Tallis Onfroy-Curley and Owen Beitenhaus all added one run each. Quinn Wilson, Sam Foster and Robe Mendives all scored twice for the Reds, along with Ivan Spar, who added one run scored.

The Reds didn’t have enough regular players on Friday and forfeited to the Indians, who kept their undefeated record intact. However, players from the Dragons and Pirates joined the available Reds for an unofficial scrimmage in which the combined team outlasted the Indians 17–8 in what would have been the Indians’ only defeat, had it counted.

Saturday’s rain moved the post-season tournament to Sunday, which saw some of the season’s best played games by all teams. The Indians advanced to the final with a close 6–4 win over the Dragons, who played some great defense by holding the hard hitting Indians to only six runs. Deena Green put the Indians on the board with a first inning two-RBI triple, scoring Pete Freeman and Luka Sage-Frabotta after their base hits. Green then scored on Keldon Harker’s base hit. The Dragons scored twice in the second when Brady Baker and Liam McLean crossed the plate. Then Gage Kostrzewa and Ashlea Roe scored in the third to pull the Dragons within one after Josh Clark and Pete Freeman both scored in the Indians third, with Todd Harding adding an insurance run in the fourth on Ethan Knemeyer’s RBI single.

The Pirates kept their win streak alive by dominating a short-handed Reds squad in Saturday’s second semi-final 16–5. Vaughn Hendrickson and Matt Duncan scored three runs each, while Dale Shelton and Amil Wagner each scored twice for the Pirates. Ivan Spar went three-for-three and scored three times for the Reds, with Dominick Fisher and Quinn Wilson adding two runs each and Mason Lindsey scoring once.

So Sunday night’s tourney championship game saw the Pirates, who started the day at 2–8 overall, taking on the undefeated Indians. Both teams held each other scoreless in the first with the Indians then scoring in the second on RBI singles from Owen Beitenhaus and Ethan Knemeyer that scored Dimitri Wallace and Todd Harding. The Pirates then responded and went up 3–2 when Vaughn Hendrickson and Dale Shelton scored on Amil Wagner’s hard-hit triple.

The third inning saw Pete Freeman score for the Indians after hitting a triple and then scoring on Luka Sage-Frabotta’s base hit, which later scored along with Deena Green to take a 5–3 Indians lead. The Pirates’ bats stayed hot in the top of the fourth and they took a 6–5 lead when Emmett Cipollini doubled and then scored on Dale Shelton’s base hit, which later scored on James Benton’s two RBI single that also scored Vaughn Hendrickson.

The Pirates’ defense stiffened, holding the Indians scoreless in the bottom of fourth, including great put-out catches by Liam Hackett and Ty Thompson. The Indians returned the favor by holding the Pirates scoreless in the top of the fifth to enter the last half-inning of the game down by one run. The Indians strength at the plate came through to take the win as Luka-Sage Frabotta singled and then scored the tying run on Keldon Harker’s base-hit followed by Todd Harding’s winning RBI that helped Deena Green cross the plate and sealed the win with a 7–6 final score.

Meanwhile, the Major League game Sunday evening saw Cameron Haught put on a show, going three for four at the plate, including a home run, two doubles, a base hit, three runs scored and seven RBIs to lead the red squad in a 15–4 win over the white squad. Dylan Rainey also scored three runs off three base hits with a pair of RBIs. Jack Runyon, Eamonn Cary, Colton Bittner and Jacob Woodburn also added two runs each. Will Midtbo, Eli Schell, Tony Marinelli and Kayla Brown all scored once for the white squad.