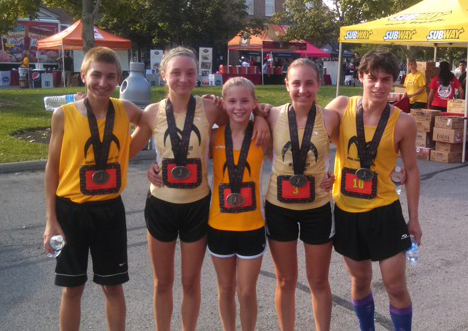 From left, Michael Belovich, Charlotte Walkey, Taylor Ewert, Emily Belovich and Cameron Haught all competed in the ninth annual New Albany Walking Classic with 3,000 other participants on Sept. 8. All five placed in the top 12 overall. (Submitted photo by Vince Peters)

The Bulldogs must win or tie Dayton Christian on Oct. 3 at home to win the title outright.

YSHS junior Ian Chick scored a hat trick in the YSHS victory. Hayden Orme also had a goal on the night.

With the win over Troy Christian, the Bulldogs, who are an undefeated 3–0 in the conference, are guaranteed at least a share of the Metro Buckeye Conference championship. Last year they were co-champs with Dayton Christian. The last time YSHS won the conference title outright was in 2008.

Coach Van Ausdal is proud of the teamwork he has seen on this year’s squad.
“They’re playing really well together right now,” Van Ausdal said.

“There’s a lot of individual talent but they’re not just looking out for themselves, they’re playing as a team.”

Orme advances to districts
At the girls golf sectional tournament on Monday, held at the WGC Golf Course in Xenia, the first YSHS girls golf team competed, but did not advance.

Senior golfer Rachele Orme, however, won a medal for a performance of 83 over 18 holes. She advances to next week’s district meet, the second district berth of her YSHS golf career.

Girls soccer drops three
After a mid-season respite the Lady Bulldogs returned to action against Middletown Christian last week. YSHS played hard with sophomore Alice Miller and junior Kaila Russell shutting down the midfield but the team was unable to connect enough to find the back of the net.

On Sept. 19 the Lady Bulldogs continued conference play on the turf at Miami Valley School. The YSHS defense anchored by sophomore goalkeeper Ashley Longshaw and sophomore sweeper Ursula Kremer held the Rams scoreless for thirty minutes in the first half with junior Kara Edwards and senior Brianna Ayers creating opportunities off of good transition play. The Rams found the net before halftime and the second half started with the Lady Bulldogs down. YSHS pushed the ball forward on the wings through sophomore midfielder Anna Mullins and senior Sierra Lawrence, who both created scoring opportunities. The second half was a back and forth game until the last five minutes when the Rams broke through the defense and found the back of the net twice.

In the third contest of the week the Lady Bulldogs started strong and surprised the Beavercreek offense with early opportunities from a sophomore, Ayeshia Allison, and Edwards. Beavercreek countered with speed and found the net early but the outside defenders junior Sarah Jako and sophomore Adrienne Powell worked hard to limit opportunities from the corners. Longshaw, in goal, logged sixteen saves until she was sidelined with an injury. Ayers stepped up to play goal. The Lady Bulldogs showed how much they have improved as Lawrence and Allison kept high pressure on the Beavercreek offense and the YSHS defense, with the second half additions of senior Sharde Scott and freshman defenders Dani Worsham and Erica Ranard, held the Beavercreek team to four goals in the second half.

Charlotte Walkey equaled her best time of the year on the tough course (22:10) and finished seventh overall – easily her best outing of the year. Walkey’s first mile was an incredible fast 6:18 as she launched herself off the peak. This led the Lady Bulldogs to a 11th place out of the 14 schools that scored at the meet. Olivia Brintlinger-Conn also earned an award-placing 40th overall in 24:40 – her second fastest time of the year. Christina Brewer maintained pace with Brintlinger-Conn over the first half of the race but struggled a bit over the last mile to finish 65th in 26:42. Maya Creighton was 86th overall in 28:45 (her second best time ever) while Emma Romohr was 95th in 31:11 to complete the squad’s scoring.

Walkey led the way this week at the Bellbrook Invitational with an aggressive first couple miles. Walkey came in seventh with a season-best time of 22:00.

Brintlinger-Conn achieved a solid 24:42 clocking good for 24th place out of the 68 women who completed the challenging course. Creighton also ran a strong race just missing her season-best time. Creighton placed 43rd in 27:53. Romohr chased after Creighton throughout the 5k race and placed 55th in 30:48.

Boys XC takes 7th, 13th
For the boys cross-country team, Cameron Haught placed 23rd in 19:00 at the Ohio Caverns Invitational. Connor Gravley-Novello placed 36th in 19:32 after a strong kick. Levi Brown was the squad’s number three scorer on this day as he sped through the first mile in 6:06. However the hills over the next two miles took their toll and Brown finished 86th in 21:35. Josh Seitz returned to competition with a 102nd-place finish in 22:37. Oluka Okia, who had a very strong first two miles, faded a bit at the end to place 111th in 23:29. The boys team placed 13th out of the 16 schools that finished the race and scored.

This week at the Bellbrook Invitational, Haught grabbed 12th overall and Gravley-Novello, 15th, in 19:35 and 19:40, respectively. Brown finished 49th in 21:42 and Seitz recorded a season-best time of 22:20, good for 55th. Okia completed the scoring with his 64th place posting in 23:25. The Bulldogs placed seventh overall out of the 11 schools.

Varsity volleyball now 4–5
Last week, the YSHS varsity volleyball team worked together for an easy victory over Jefferson. The Lady Bulldogs won in three games: 25–6, 25–9, 25–14. Kennedy Harshaw and Madeline Neilson both had nine kills in the victory. Hannah Brown added 10 aces and 16 assists on the night.

Later in the week, the varsity volleyball team played Middletown Christian. After four close games that were all within just a few points (25–20, 25–23, 24–26, 25–21), the Bulldogs fell short and were defeated in the fifth. Harshaw led the team with 18 kills, Brown contributed 15 assists and Kasey Linkhart added 12 assists and two blocks.

For their third match in a week, YSHS traveled to Emmanuel Christian for three intense, high-level games of volleyball. The Lady Bulldogs were defeated in three games (25–14, 25–23, 25–16) despite the fact that they played their best and competed hard.

“There was no lack of effort in this match, we just were outplayed,” Kerns said. The rematch against Emmanuel Christian will be the Lady Bulldog’s final home game and senior night.

JV volleyball wins three
On Sept. 17, the YSHS JV volleyball team played Middletown Christian at home and were behind for most of the game. Down seven points, 16–23, Julie Roberts started serving and didn’t stop. Thanks to her strategic serving (nine unanswered points), and her teammates hammering the opponents with 10 kills total, the Lady Bulldogs won the game 25–23. The second game belonged to the Bulldogs with a relatively easy win, 25-13. Elizabeth Smith added eight points and four aces. Amelia Gray had six points and Mollye Malone registered five kills.

Later in the week, the Lady Bulldogs traveled to Emmanuel Christian. After battling point for point in the first game, YSHS finally pulled away when the score was 13–11 when Dani Worsham served up nine unanswered points, six of them aces. The Lady Bulldogs went on to win the game 25–19. The second game again belonged to YSHS with Dani Worsham again serving up seven points (five aces) and big digs by Smith (4), Aliza Skinner (6) and Gracie Wilke (9).