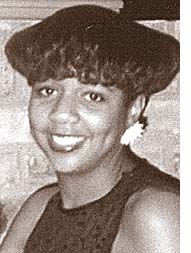 Millicent Danita Walker-Jones was born on Dec. 29, 1962 in Cincinnati. She was the lovely daughter of the late Earl B. and Phyllis MB Walker. Millicent grew up in Yellow Springs and attended Christ Episcopal Church. She accepted the Lord at an early age and was an active member within the church.

As a child becoming a young adult, Millicent participated in Girl Scouts, soccer, volleyball, cheerleading and softball. She graduated from YSHS in 1981. Millicent went on to attend and graduate from Central State University with a bachelor of science degree in education in 1986. After achieving her bachelor’s degree, she developed a career in the field of business and sales. Millicent was best known for her success as a public relations director at Wilberforce University and director of marketing at the Boy Scouts of America.

Millicent was blessed to be reunited with her mother, Adele Brownlee, and siblings. Along with her loving sister Elaina, they gained two brothers and one sister.

Millicent fought a long and hard battle with cancer prior to her peacefully departing this life on Nov. 25. She is preceded in death by her parents, Earl and Phyllis Walker and biological father, Alvin Kelly. Millicent leaves to cherish her memory Adele C. (George) Brownlee of Maryland; two sisters, Elaina Maria Walker of Ohio and Shonda Kelly of Wisconsin; two brothers, George L. (Gail) Brownlee of Maryland and Michael (Sheryl) Kelly of Wisconsin, and a host of nieces, nephews, cousins and friends.