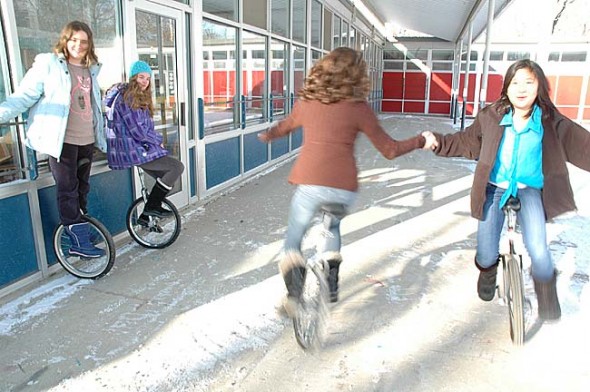 Nearly half of the Antioch School’s 52 students benefit from the scholarships that come partly from the annual Antioch School Auction and Comedy Show gala. This year’s event, featuring well-known comedian Julia Sweeney and musician Jill Sobule, will take place March 1. Guests are asked to reserve a spot by Feb. 21. Above, last week’s cold and ice did not keep students, from left, Selah Griffin, Samantha Snyder, Lida Boutis and Olivia Ling, from spinning around the school’s patio on their unicycles. (Photo by Lauren Heaton)

It was chance that brought former Saturday Night Live comedian Julia Sweeney to Yellow Springs two years ago to perform for the Antioch School’s fundraiser gala. Two school parents went to Chicago to see her show and afterward asked if she would consider performing at the annual event in 2012. And possibly due to the impression the little school made, this year Sweeney asked if she could come back to help raise more money for the child-centered school.

Sweeney was not available for comment this week, but according to Antioch School manager M.J. Richlen, last winter Sweeney said that “she would love to come back again … so she invited herself back — and we’re thrilled to have her.”

This time Sweeney, who played “Pat” on SNL and has performed on Broadway and written for television hits such as “Sex and the City” and “Frasier,” is bringing with her a musical partner, Jill Sobule, a socially conscious singer/songwriter and TED Talks presenter. Together they created the “Jill and Julia Show,” which according to their Web site “pairs Jill’s witty songwriting with Julia’s wildly funny monologues for a show about love lost and found, love wished for and love taken away, the complicated joys of family, navigating mid-life, and living in our crazy, modern world.”

The third annual Antioch School Auction & Comedy Show Gala takes place Saturday evening, March 1, at the Dayton Art Museum. Tickets are $55 and participants are asked to reserve a spot before Feb. 21 by calling the school at 767-7642.

The gala is the Antioch School’s largest event to support the scholarship fund, which awarded over $71,000 to just under half of the school’s 52 students. The amount represents about 27 percent of each family’s financial aid need, and it is a slight increase over the previous year’s aid. Though the school’s six teachers dream of a day when an fully endowed scholarship fund can support 100 percent of the need for its students, the gala has helped the school to make significant strides. The added income has also helped the school to hire a music teacher, invigorate its theater program and plan a foreign language program to begin next year.

“The importance of the Auction and Comedy Show Gala is extremely significant in terms of the school’s ability to increase financial aid awards and maintain diversity in our school population,” Richlen said.

Long-time teachers Chris Powell and Anne Guthrie are pleased with what the gala has done to make their “child sized school” accessible to more students.

“It makes me smile inside,” Powell said.