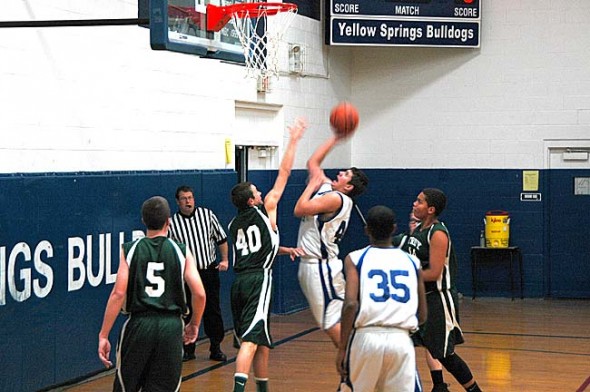 The boys team clinched its first win of the season against Greenon during the Bulldog Classic tournament held at home on Friday night. The 61–55 win was followed by an all-out loss on Saturday night to Div. I Meadowdale in the finals of the local tournament, which also included Horizon Science Academy.

Against Greenon, the Bulldogs, still raw from three early season losses, came out tentative. The teams kept pace with each other, going into the fourth quarter with Greenon ahead 44–42, when junior co-captain Liam Weigand helped turned the tide with an inside sinker and a three pointer off of a throw-in. Isaiah Taylor led Yellow Springs with 17 points, followed closely by Kaner Butler with 16. Weigand had 10 points on the night.

The Warriors overwhelmed the inexperienced Bulldogs with a suffocating press and took control of the game after the first quarter. The following three quarters the Bulldogs played the best they have all season, as they continued to improve with moving the ball, running plays, rebounding and playing great defense.

James Browning led the Bulldogs in points and rebounds, two off a beautiful pass from Tony Marinelli, who also had four points. Others scoring were Jaylen Lewis off a strong offensive rebound, and Naseem Chappelle. Jakob Woodburn had a strong rebound, and Chappelle, Eli Schell, Clay Cooper, Zach Brintlinger-Conn, and Christian Elam were pesky and scrappy on defense with pressure and steals.

The Bulldogs play the Warriors again for their return to action Jan. 9 at Dayton Christian.

On Thursday, Dec. 19, a raucous home crowd propelled the seventh-grade Bulldogs to a thrilling 37–36 overtime win versus Dayton Christian. After falling behind early in the game, the entire team exhibited a ton of competitive desire and basketball intelligence as it worked hard to win against Dayton Christian’s full court pressure. On the defensive end, Jesse Linkhart recorded the first charge taken for the team this year. Tyreese Benning was aggressive and productive on offense, netting 22 points.

In a road contest against Dayton Horizon Science Academy on Dec. 18, the seventh-grade Bulldogs started quickly and sustained a high level of effort throughout the game, earning a 46–19 victory. Elliot Wiggins provided energy and hustle on both ends of the court. Will Midtbo contributed to the scoring with a basket. Andrew Clark had an excellent night at the free throw line, converting eight out of 10 attempts. He finished the game with 16 points and six assists.