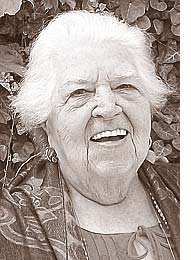 Ruth Olivia Gladman Colvin, “Livvy,” was born April 3, 1930 in Harrison County, Ohio to Florence and William Gladman. A farm girl to her core, she loved sharing stories with anybody that would listen about her life on the farm and the remarkable way of life she knew and loved so much. She graduated from Uhrichsville High School in 1948 and attended Kent State University in Kent, Ohio. She received her teaching certification and began a long career of teaching and learning, one of her lifelong passions. She married Dean B. Colvin in June of 1952, and together they had three daughters. She graduated summa cum laude from Central State University in 1972 and began her second career in the Hallie Q. Brown Memorial Library at Central State. She retired from Central State University in 1994 and continued as an active “friend” of the Hallie Q. Brown Memorial Library. Olivia passed away peacefully, and full of life to the very end at her home in Xenia on Jan. 22.

Her family was “her greatest joy.” Always on stand-by duty, she could be called upon to act as babysitter, chauffer, cook, seamstress, source of all knowledge, grammar and etiquette police, or in her most important role as someone who listened and loved.

Olivia had a passion for the theater; the world was her stage. While a resident of Yellow Springs, she was deeply committed to Center Stage Theater. When she moved to Xenia in 2001 she, along with others, embraced the idea of starting a community theater and she was one of the founding directors of the Xenia Area Community Theater (X*ACT). She acted, directed, stage managed, designed costumes for many years and was an active board member as her final act.