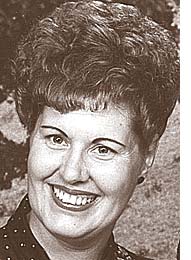 After a long battle with cancer, Barbara (Gundolf) Monnin passed away peacefully, surrounded by family and friends, on Feb. 3.

Barbara was born on Sept. 20, 1937 in Springfield to Raymond Gundolf and Irene (Dinges) Gundolf. A caring, generous, and lively individual, she actively supported several charity organizations, such as the Fairborn Food Pantry (FISH). Barbara was also very active in several organizations associated with Mary Help of Christians Catholic Church, such as the Daughters of Isabella and Alter Rosary Society. Barbara’s infectious laugh, cheerful demeanor, and love of life will be sorely missed by her many friends in these organizations.

Barbara married Eddie Bayard, of New Orleans, after graduating from Enon High School in 1956 and immediately began populating the Fairborn area with strapping, rambunctious Bayard boys: Gary, Steve, Roger and Alan. After her marriage to Eddie terminated, she spent a number of years working for the United States Air Force at the Foreign Technology Division at Wright-Patterson Air Force Base where she met her husband, Frank Monnin, originally of Russia, Ohio, and a short time later gave birth to the daughter she had so longed for, Lisa (Monnin) Corn.

Barbara also will be missed by her many loving friends. Her family was her greatest joy and she enthusiastically enjoyed hosting and attending family gatherings and holidays. Barbara adored her grandchildren and devoted much of her time caring for them as young children and later as young adults. Her guidance, support, and caring nature will be sorely missed by these young people who greatly benefitted from such a kind and generous grandparent.

Barbara’s life was celebrated at a viewing on Thursday, Feb. 6, at Burcham Jennings Funeral Home in Fairborn. A funeral Mass in her memory was held at Mary Help of Christians Catholic Church on Friday, Feb. 7, immediately followed by burial at Valleyview Memorial Gardens west of Xenia.

The Monnin/Bayard family would like to thank all the employees at the Friends Care Center, Soin Medical Center and Vitas Hospice for the incredible loving care they showed Barbara during her last few months, and hours, that she was with us. In lieu of flowers, the family has asked that donations be sent to Vitas Hospice, 3055 Kettering Blvd, Suite 400, Dayton, OH 45439. Online condolences may be made to the family at http://www.buchamfuneralhome.com.