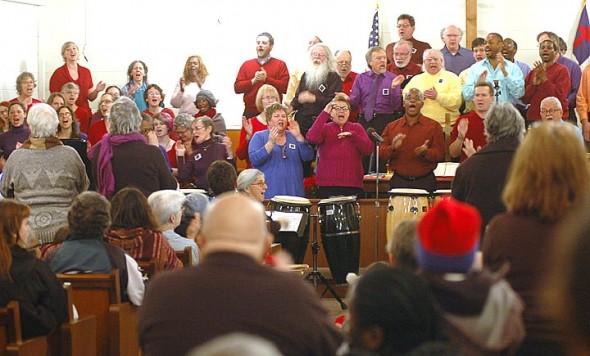 The World House Choir, a local choir under the helm of Catherine Roma, will begin rehearsals for its performance at the annual Coretta Scott King celebration next week. (Photo by Matt Minde)

The World House Choir will hold rehearsals in preparation for the upcoming celebration of Coretta Scott King’s birthday during the months of February, March and April. Rehearsals will be held Monday and Tuesday, Feb. 24 and 25; Tuesday, March 4 and Mondays, March 10 and 24; Tuesdays, April 1 and 22 and Mondays, April 7 and 21, with the performance to be held Sunday, April 27. All rehearsals are held at 7 p.m. in the Coretta Scott King Center on the Antioch College Campus, and childcare is provided.

The World House Choir is a diverse, multicultural, mixed-voice choir, whose repertoire is drawn from different traditions, including world music, spirituals, gospel, folk and peace and justice. The choir is under the helm of director Catherine Roma, founder of MUSE, a Cincinnati-based women’s choir. Roma welcomes new members to join the World House Choir.