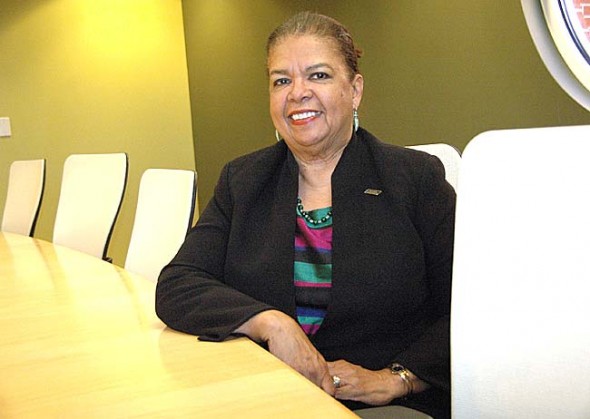 Antioch University Midwest President Karen Schuster Webb comes to Yellow Springs with extensive experience growing education programs within university systems. And she is committed to further rooting Midwest as the “the destination for adult learners” in the local community. (Photo by Lauren Heaton)

AUM president at home at Midwest

When Karen Schuster Webb became president of Antioch University Midwest in January, she had been here for less than two months. But she had a pretty good idea what she was getting into.

Though she grew up in Nashville, Tenn., Webb has known about Antioch College since she was a girl. Her mother, a woman of Native-American and African-American heritage, was drawn to the socially progressive school in the 1960s and longed to attend. When Webb went to Indiana University at the age of 16, she heard about it again as a liberal arts counterpart in the neighboring state. Later, while working in Baltimore, Webb encountered an Antioch satellite campus focused on making a college education accessible to underprivileged youth.

For Webb, Antioch’s national and international reputation was secondary to its long-held commitment to social justice and equity in education. She started the teacher education program at Alliant International University, an eight-campus graduate and undergraduate system based in San Francisco, Calif. And she made sure that its education programs in Mexico, Jordan, Vietnam and Afghanistan were located in urban areas with access to paid internship programs where students could apply their skills and get immediate feedback. She has also helped to develop a series of TESOL (teaching English as a second language) courses for high schools in Jordan.

“My passion is equity in access,” Webb said in a recent interview. “And the mission of Antioch, especially the social, economic and environmental justice has always resonated with me.”

Webb has always had an interest in learning and a tendency to be a “bit of an overachiever.” Her mother was a high school guidance counselor and business teacher, and her father was a dean and business professor. She also spent two years in Ghana and a year in Nigeria when her father was working for the U.S. Agency for International Development, and she grew to love traveling and discovering different cultures. Back home, Webb skipped a grade and then consolidated courses to graduate early from high school, and then she was off to a life spent in education. After college, Webb taught second grade, middle school and high school in California, but wanted to use her skills as a linguist, and returned to school for graduate degrees in sociolinguistics, including a Ph.D. in applied linguistics.

Webb is also quite familiar with university systems. While Alliant began as the California School for Professional Psychology, Webb was instrumental in helping it to become a university by founding its school of education, from whence it opened campuses across California and in Mexico City. She traveled extensively to establish programs abroad and also connected with the international peace organization UNESCO to host conferences for the World Council for Curriculum and Instruction and represented UNESCO at the United Nations’ Department of Information.

As someone who feels she had strong guidance in developing her career, Webb said she wanted to be able to return the favor by taking on leadership roles herself.

“I’ve been very blessed and fortunate to have extraordinary mentors,” she said. “You can’t always repay those gifts in kind, but you can pass it on.”

After serving as provost at Alliant, Webb felt the pull from Antioch, whose mission has always been in line with her vision to serve the needs of the community. She feels that the university’s programs in education (one of six schools in Ohio and first in the Dayton region to achieve 100 percent passage rate on the state exam for teachers and principals), bachelor of arts completion, master’s programs and Ph.D. in leadership and change fulfill that commitment to being “really community centered, work-force centered and partnership centered,” she said. And she hopes that feeling is shared by local residents.

“In Yellow Springs, we want to be known as great partners and great neighbors,” Webb said, partly because she believes in growing from the ground up.

“I believe you start at home and expand — like in life, you have roots, and ours are here in Yellow Springs,” she said. “Our vision is to become the destination for adult learners in this community.”

Part of that journey at Midwest will include evaluating the needs of contemporary adult learners (including looking at Noel-Levitz Adult Student Priorities Surveys) and how the needs intersect with existing areas of expertise and opportunities to invest in new areas.

“In that pioneering spirit, we’re always seeking to serve our existing constituency but also let others know about us.”

Midwest is also proud to work with the public schools to offer online courses to high school students as well as training for local teachers now leading a curriculum change to project-based education.

Webb also wants more people to know what she called “our story,” a compelling one she hears often about the impact Antioch University has had on the lives of its students. She happened upon such a story during her visit as a candidate for the position. One student told her, unsolicited, “This is a special place…if you’re president, I want you to keep it a special place.” Midwest sets itself apart from other schools through not just relevant content and dedicated faculty, but also by “high-touch caring and mentoring” of students, Webb said.

“We want to attract people who are looking for that type of transformation that will enable them to make a difference with a life of purpose,” she said. “Even if you’re here for more pragmatic reasons, it’s in the DNA here — you’re going to be bold, you’re going to learn how to make a difference. In fact, that’s your responsibility as a citizen…your obligation to humanity.”

Webb came to Midwest in November in a pre-presidential appointment as vice president of academic affairs. She assumed office as president on Jan. 1 and worked with former Interim President Ellen Hall (who was here for a year and a half) during the transition. Having moved from California, where her two sons live, Webb decided to rent a home in Beavercreek until her husband joins her this summer. Having taught at the University of Kentucky for a time, with family in Indianapolis, Webb said, “I really feel like I’m back home.”