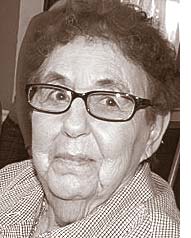 Edna “Eddie” Pitstick, of Yellow Springs, passed away peacefully on Saturday, March 1, at Friends Care Center. She was 85.

Edna grew up in Dayton and graduated from Julienne High School. Two weeks after graduation, she married her beloved Gene, and they were together 63 years until he passed in 2009. Edna was a dedicated wife, mother and grandmother and worked hard on the family farm. She was a member of St. Paul Catholic Church. A visitation will be held on Thursday, March 6, at Jackson Lytle and Lewis Funeral Home in Yellow Springs, 4–7 p.m. A Mass of Christian Burial will follow on Friday, March 7, at 10 a.m., at St. Paul Catholic Church, with Father Anthony Geraci officiating. Burial will follow at St. Paul Catholic Cemetery. Memorial contributions may be made in Edna’s name to Sisters of St. Francis, P.O. Box 100 Oldenburg, IN 47036. Condolences may be made to the family by visiting http://www.jacksonlytle.com.